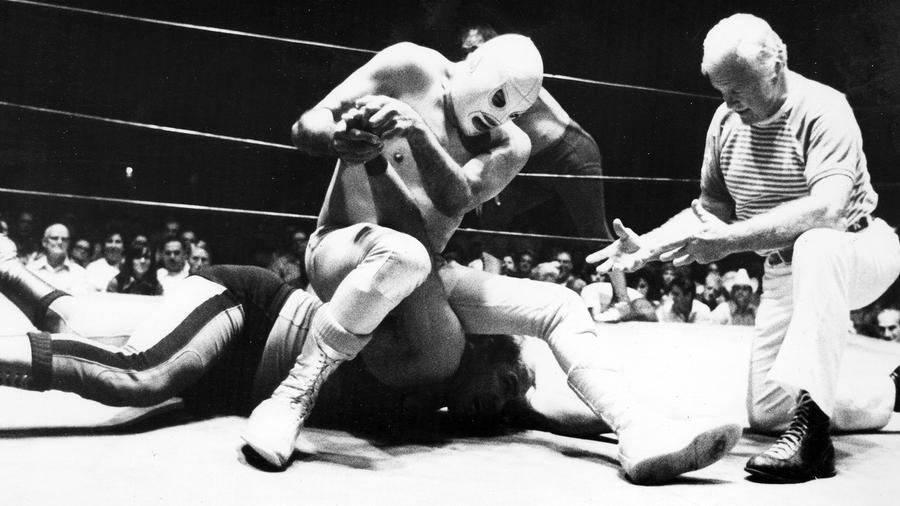 El Santo is, perhaps, the most famous grappler in the history of lucha libre. WWE Hall of Famer Eddie Guerrero once wrote that “Calling him a legend doesn’t even do justice to how big he was. In his heyday, Santo was bigger than Hulk Hogan and ‘Stone Cold’ Steve Austin combined.”

It’s hard to argue with Guerrero, as Santo transcended sports-entertainment and became a movie star, one of Mexico’s biggest celebrities and a revered pop culture icon.

In the early 1940s, Santo first entered the squared circle donning the silver mask and cape that turned him into a real-life superhero and became his trademark across a four-decade career. The grappler known as “El Enmascarado de Plata” (The Man in The Silver Mask) engaged in legendary rivalries with luchadors like Blue Demon, thrilling fans around Mexico with his larger than life presence. Santo was no stranger to the tag team ranks, either. He joined forces with Gory Guerrero, Eddie’s father, to form La Pareja Atomica, a team that never lost a match.

Santo’s popularity could not be contained inside the squared circle. At the height of his superstardom, El Santo was featured in his own comic books and starred in more than 50 movies. The films often featured Santo as a wrestler who took on frightening monsters in his spare time. The flicks, with titles like “Santo vs. The Zombies” and “Santo vs. The Martian Invasion,” found a second life with lovers of campy movies in America and beyond. One of his most famous films, “Santo vs. The Vampire Women,” was even sent up in an episode of “Mystery Science Theater 3000.”

El Santo passed away in 1984, just a year-and-a-half after his retirement from the ring. Thousands gathered at his funeral to pay tribute to one of Mexico’s greatest heroes. His legacy continued in his son, El Hijo Del Santo, who competed for WWE in the mid-1990s, and the countless luchadors he inspired.

For his incredible contributions to lucha libre, El Santo was named a 2018 Legacy Inductee in the WWE Hall of Fame.