Raw results: End of The Road

CHICAGO – Six days. One hundred forty-four hours. Eight thousand, six hundred, forty minutes. Any way you slice it, the time has come for scores to be settled, bodies to be battered and victories to live on in the annals of history when WWE rolls into Atlanta. With The Road to WrestleMania coming to an end, Superstars were savvy enough to lay their bodies on the line in The Windy City to give themselves any possible advantage heading into The Show of Shows.

John Cena, The Rock and WWE Champion The Miz scuffled (WATCH: PART 1 | PART 2 | WWE.COM EXCLUSIVE VIDEO | PHOTOS)
The battle of words between John Cena, Dwayne “The Rock” Johnson and WWE Champion The Miz officially turned into a war. In the wake of insults hurled about by each of these three men, tensions finally came to a head. The Great One fended off an attack by The Cleveland Screamer and his lackey, Alex Riley. He then laid the Smackdown on both, tossing Riley from the ring and leveling Miz with The People's Elbow. While Rock relished the adulation, The Cenation Commander-in-Chief slipped into the ring and punished him with an Attitude Adjustment.

Lay-Cool confronted Snooki & Trish Stratus (WATCH)
Since Snooki successfully navigated the world of Trish Stratus, it was only fair that the former Women’s Champion get her Jersey Shore on. Stratus and the diminutive dynamo hung out at a bar in the Garden State. After the pair fended off a creepin’ male, they were confronted by two of their WrestleMania opponents, Layla & Michelle McCool. In the wake of some heated words, Lay-Cool found themselves summarily shown the door by bouncers. Ouch.

The Road Warriors and Paul Ellering announced as the latest Class of 2011 WWE Hall of Fame Inductees (WATCH)
Oh, what a rush! The pioneering tag team of Animal & Hawk, known throughout the WWE Universe as The Road Warriors, along with manager Paul Ellering, were announced as the latest inductees in the WWE Hall of Fame, Class of 2011. 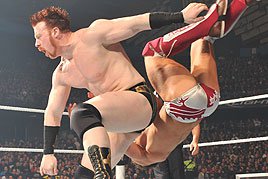 U.S. Champion Sheamus and Dolph Ziggler will compete against Daniel Bryan and John Morrison respectively when they meet in separate matches at WrestleMania. For now, though, the four unleashed their frustrations in a tag team match. When the dust settled, The Celtic Warrior & Ziggler bested Bryan & The Shaman of Sexy when The Irishman finally pinned his WrestleMania rival to carry his team over the top.

Jack Swagger def. Jerry Lawler by Disqualification (WATCH | PHOTOS)
After weeks of getting battered by Michael Cole’s trainer Jack Swagger, Jerry “The King” Lawler didn’t miss the opportunity to punish the blond bully. As the bell sounded, Lawler grabbed a steel chair and retaliated against The All-American American, causing an instant loss by disqualification.

King then went after Cole, attacking the protective Plexiglass cube his WrestleMania opponent has dubbed “The Cole Mine.” Before he could crack into the structure, however, a stream of security dragged the WWE Hall of Famer away.

Shawn Michaels shared his thoughts on Triple H versus The Undertaker (WATCH | PHOTOS)
Welcome to the hot seat, Shawn Michaels. The Class of 2011 WWE Hall of Fame Inductee found himself caught between two iconic Superstars when he joined Triple H and The Undertaker in the ring to discuss their WrestleMania showdown. 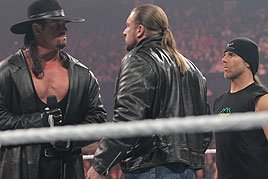 Before putting HBK on the spot, however, The King of Kings explained that he will not be intimidated by The Phenom or allow his emotions to overtake him. For his part, The Undertaker interpreted The Game’s confidence as arrogance and vowed that it would prove to be his downfall.

As the two warring icons stood face-to-face, The Cerebral Assassin asked Michaels to explain why he will prevail in six days. After much deliberation, The Showstopper reluctantly left the ring. As he walked away, he admitted to his friend that he felt The Deadman could not be beaten at WrestleMania.

Also, it was announced that Santino, Vlad, Show & Kane will join forces at WrestleMania to compete in an Eight-Man Tag Team Match against The Corre, including the WWE Tag Team Champions, Ezekiel Jackson and new Intercontinental Champion Wade Barrett.

Sin Cara arrives on Raw next Monday (WATCH)
Possessing a rich history and deep reservoir of talent, Sin Cara will become the latest impressive import to join the Raw roster. The masked Mexican explodes onto the WWE landscape next Monday in what promises to be a dynamic debut. 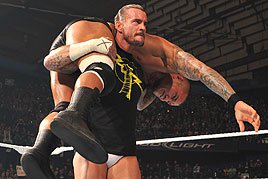 Randy Orton appeared hungry for CM Punk’s head on a platter. And really, who could blame him? Last week, Punk terrorized Orton’s wife on their tour bus in order to lure his WrestleMania opponent into perilous straits. When The Viper arrived to defend his wife, Punk hobbled him with a wrench to the knee.

Returning to his hometown, The Second City Savior boasted about the ambush and theorized that Orton had developed a false sense of security after defeating each of Punk’s New Nexus disciples. Having heard enough, WWE’s Apex Predator confronted his tormentor. Amid the ensuing scuffle, Orton lined up to punt The Second City Savior in the skull. Unfortunately for him, though, his knee wouldn’t allow it. Punk seized the opportunity and instead leveled Orton with a jaw-rattling GTS.