INDIANAPOLIS — In his first days as WWE’s Chief Operating Officer, Triple H was faced with one of the most complex problems in the company’s storied history — who is the real WWE Champion? Is it CM Punk — the Superstar who beat John Cena for the title at WWE Money in the Bank before leaving the company, only to return a week later with the championship in hand? Or is it Cena — the man who defeated Rey Mysterio for the WWE Title on the same night the masked Superstar won a tournament for the supposedly vacant championship? After considering both cases for some time, The Game finally hit upon a vital fact — the most important choices aren’t made in a boardroom, they’re decided in the ring.

Triple H resolved the WWE Championship situation (WATCH | PHOTOS)
For the first time in WWE history, there are two legitimate WWE Champions, but which man is the real title holder? That was the question Triple H tangled with tonight as John Cena and CM Punk pressed the COO for a decision.

It was a tough judgment for The Game, but before he could reveal his solution, he was interrupted by WWE’s Executive Vice President of Talent Relations John Laurinaitis. A longtime associate of Mr. McMahon, the executive made his feelings on the matter clear — strip John Cena of the title.

Unsurprisingly, Mr. Laurinaitis’ words brought an irate John Cena forth. Verbally berating the executive, The Champ claimed Laurinaitis wanted him stripped of the title, because Cena laid him out at WWE Money in the Bank. Cena then threatened to harm Mr. Laurinaitis again, leading the VP to leave the ring as fast as his feet could carry him.

Now alone with Cena, Triple H informed The Champ that he would not strip him of the WWE Championship. Hearing that, CM Punk immediately hit the ring, prepared to state his case to the COO.

As the two champions began to argue, The Game laid it out like this — at SummerSlam, John Cena and CM Punk will meet in the first ever WWE Champion vs. WWE Champion Match. The Superstar that walks away victorious will be the Undisputed WWE Champion. End of story. 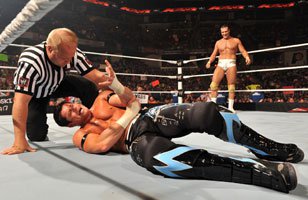 Alberto Del Rio def. Evan Bourne (WATCH | PHOTOS)
He has enormous wealth, fancy cars and the Money in the Bank briefcase, but Alberto Del Rio still operates like a man with something to prove. Why else would The Mexican Aristocrat apply a bone snapping armbar to Evan Bourne long after he defeated the high-flyer in the ring? Looking to send a message to the locker room, the arrogant Superstar nearly broke Bourne’s arm until Kofi Kingston stormed the ring and chased Del Rio — and his lackey Ricardo Rodriguez — out of the arena.

Alex Riley confronted United States Champion Dolph Ziggler & Vickie Guerrero (WATCH | PHOTOS)
Tonight, Alex Riley gave Dolph Ziggler some invaluable career advice whether the bleached blond wanted it or not. In the middle of another one of Vickie Guerrero’s annoying rants about the presumed greatness of the United States Champion, A-Ry thankfully interrupted and announced that Ziggler had spent too much time hiding behind the loudmouthed lady and needed to prove himself on his own.

Infuriated, Ziggler nearly attacked Riley, but slid out of the ring instead and stormed away with Vickie by his side.

The Miz & R-Truth def. Rey Mysterio & John Morrison (WATCH | PHOTOS)
After spending three months on the sidelines due to a brutal attack from R-Truth, John Morrison was finally able to face his rival in the ring tonight, but he didn’t come alone. Teaming with Rey Mysterio — the Superstar who beat The Miz for the vacant WWE Title before losing it to John Cena last Monday night — JoMo showed little sign of ring rust, but he still wasn’t ready for his underhanded opponents. Losing to Truth, Morrison then fell victim to both The Awesome One’s Skull Crushing Finale and a water bottle to the side of the head from the conspiracy-obsessed Superstar. 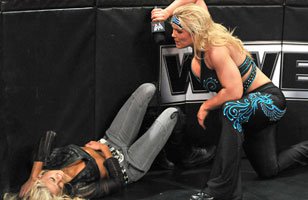 Beth Phoenix won a No. 1 Contender’s Diva Battle Royal (WATCH | PHOTOS)
She’s long been touted as WWE’s most powerful Diva, so the WWE Universe was not surprised when Beth Phoenix triumphed over the ladies of Raw and SmackDown to earn a Divas Title Match against Kelly Kelly at SummerSlam. It’s what happened next that shocked everyone.

Entering the ring to congratulate the winner, the Divas Champion gave Beth a big hug in a refreshing moment of good sportsmanship. In return, The Glamazon unexpectedly attacked the beautiful competitor, brutally tossing her out of the ring before shouting, “Your days as the perky, cute, little bimbo are over!”

Clearly, things between these two Divas just got personal.

Triple H and a re-signed CM Punk exchanged heated words (WATCH: PART 1 | PART 2 | PHOTOS)
Following last week’s scandalous return to WWE, the always contentious CM Punk kicked off tonight’s Raw by inciting more controversy. Stating that he re-signed with WWE because he wanted to bring about change, The Straight Edge Superstar proclaimed himself the one and only WWE Champion, which drew out WWE Chief Operating Officer Triple H. Taking issue with the arrogant Superstar’s words, The Game said he re-signed Punk because it was good for business even though he personally found him smug and overrated. As tensions mounted between the two, Triple H made it clear that both Punk and John Cena are legitimate champions to which the overconfident Punk shot back that there can only be one title holder. The Game did not debate this point and promised to rectify the situation tonight.