BOSTON – Apparently, CM Punk’s vitriolic – and yes, classic – diatribe two weeks ago was but a prelude. The Second City Savior poured even more gasoline onto his already fiery rhetoric with just six days before the Money in the Bank pay-per-view.

Contract negotiations unraveled between CM Punk and Mr. McMahon; WWE Champion John Cena attacked Punk (WATCH: PART 1 | PART 2 | PHOTOS)
CM Punk is a man with nothing to lose. And that makes him a dangerous man, indeed.

Two weeks after giving Mr. McMahon the verbal equivalent of a kick in the grapefruits, The Second City Savior returned to Raw to renegotiate his contract. This time, though, he clearly had the upper hand. Although The Chairman had agreed to all of Punk’s earlier demands in the wake of a threat by WWE Champion John Cena, the preachy Superstar still wasn’t satisfied. Punk insisted that he also receive a private jet, that WWE ice cream bars return, that he star in his own movie and that he main event at WrestleMania. Although Mr. McMahon appeared grudgingly prepared to sign, Cena brought negotiations screeching to a halt.

The WWE Champion confronted Punk and things quickly devolved. After listening to Punk deride him for becoming everything he hates, Cena clocked his Money in the Bank opponent, who wisely snatched the contract from Mr. McMahon and skirted from the ring. He fled up the entrance ramp and once again unleashed a tirade against Cena, Mr. McMahon and the whole of the WWE Universe before tearing up his unsigned contract.

Big Show vs. U.S. Champion Dolph Ziggler & Drew McIntyre ended in a Double Count-out (WATCH | PHOTOS)
Ever wonder what would happen if a tank and a tractor trailer played chicken? To get some idea, one need only watch Sunday’s match between Big Show and Mark Henry. The World’s Largest Athlete competed against U.S. Champion Dolph Ziggler & Drew McIntyre in a 2-on-1 Handicap Match, after which Big Show collided with The World’s Strongest Man. During the match, Ziggler had refused to tag in, betraying McIntyre, who suffered a miserable fate as the referee ended the match on a double count-out. When Big Show dragged the Scotsman from the ring, Henry ambushed the giant, and the two flew from the stage, crashing several feet below.

In the aftermath of the fall, both Superstars appeared in pain. Each refused medical treatment, however, and were unwilling to admit to any injuries. 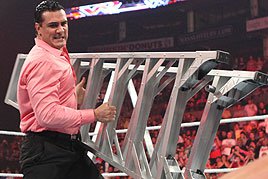 Alex Riley, Kofi Kingston & Evan Bourne def. The Miz, R-Truth & Jack Swagger (WATCH | PHOTOS)
At Money in the Bank, it’s sure to be every man for himself. Less than a week before the star-making match, however, six of the eight competitors teamed up in a Six-Man Tag Team Match. Alex Riley, Kofi Kingston & Evan Bourne joined forces to battle The Miz, R-Truth & Jack Swagger (not competing were Rey Mysterio and Alberto Del Rio, who was quick to complain that he’d already earned No. 1 contender status before Punk’s reinstatement). The six Superstars provided a small glimpse into just how the contest may unfold.

After a battalion of blows and aerial assaults by both sides, A-Ry finally pinned The All-American American for the win. Afterward, The Miz ambushed his former assistant. This led to a series of attacks until, finally, Alberto Del Rio emerged brandishing a ladder and wiped out everyone until all six Superstars were incapacitated. 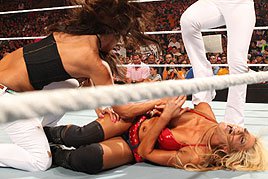 Divas Champion Kelly Kelly def. Melina (WATCH | PHOTOS)
Sure, The Bella Twins are gorgeous – on the outside. Under the surface, though, Brie & Nikki are in desperate need of makeovers. As the girls watched Divas Champion Kelly Kelly compete against Melina in a non-title bout, they skewered the blonde beauty with a barrage of petty verbal daggers. When Kelly won the match, the Bellas continued their harassment until she’d finally had enough and attacked. As the pair double-teamed their target, Eve shot into the ring to help the Divas Champion. Less than a week before Brie competes for the Divas Title at Money in the Bank, she and her sister left Kelly and Eve in an unsightly heap on the mat. 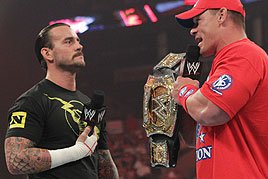 CM Punk returned, confronted WWE Champion John Cena (WATCH: PART 1 | PART 2 | PHOTOS)
Two weeks after unleashing one of the most scathing, groundbreaking rants in WWE history, The Second City Savior returned to Raw – a return made possible thanks to an unlikely source, WWE Champion John Cena. Punk’s longtime nemesis and opponent at Sunday’s Money in the Bank pay-per-view argued with Mr. McMahon about his decision to suspend Punk for the epic tirade. The WWE Chairman grudgingly relented and agreed to reinstate the holier-than-thou Superstar … under one condition. If Punk prevails on Sunday and leaves with the WWE Title, Cena will be fired.

Punk did not return, however, to thank The Champ for laying his career on the line. Instead, he was there to renegotiate his contract – on his terms. After WWE officials contacted him, The Second City Savior insisted the negotiation happen on live TV and that he will walk if The WWE Chairman himself doesn’t beg him to stay.

Cena emerged to confront Punk, but before tensions got too strained between the two, Raw’s anonymous General Manager chimed in and arranged a 2-on-1 Handicap Match pitting the WWE Champion against WWE Tag Team Champions David Otunga & Michael McGillicutty.