Raw results: What happens in Vegas ...

LAS VEGAS – The WWE Universe went for a spin in the city of sin for Raw Roulette, the one night of the year when matches, competitors and stipulations are determined by the whirling of the wheel.

R-Truth def. WWE Champion John Cena in a Raw Roulette Non-title Tables Match (WATCH | PHOTOS)
Millions of visitors “hit the tables” each year when they journey to Las Vegas, but typically not like this. In the final Raw Roulette bout of the evening, R-Truth faced WWE Champion John Cena in an emotionally charged Tables Match. All too eager to silence “Little Jimmys” around the globe by sending their hero crashing through the hardwood, Truth brought the fight to The Champ early on, but it was ultimately CM Punk who would decide the match’s outcome when he saved Truth from an Attitude Adjustment through the pine. Then, while Cena was distracted by The Second City Savior, Truth drove The Champ through a table propped up in the corner of the ring. 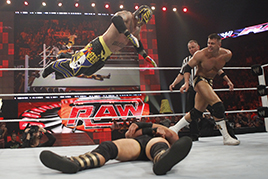 Rey Mysterio & Alex Riley def. The Miz & Jack Swagger in a Raw Roulette Tornado Match (WATCH | PHOTOS)
The Miz and Jack Swagger aren’t exactly known for adhering to rules and regulations, so a tagless Tornado Match is probably the best way these two sinister Superstars could ever join forces. However, as the ring nearly buckled under the combined weight of their massive egos, The Awesome One & The All-American American suffered a crushing defeat at the hands of Rey Mysterio & The Miz’s former apprentice, Alex Riley.

As revealed earlier in the night, all four of these ring warriors will meet in this year’s Raw Money in the Bank Ladder Match, which will guarantee the winner a WWE Title opportunity at the time and place of their choosing. Although The Miz & Swagger each hold Money in the Bank victories – achievements that they both parlayed into World Title reigns – their odds of repeating that success seem a lot less likely with A-Ry and The Master of the 619 involved. Thanks in no small part to some amazing offense by Riley, Mysterio scored a pinfall after hitting Swagger with a frog splash.

Divas Champion Kelly Kelly def. Nikki Bella in a Raw Roulette Submission Match
(WATCH | PHOTOS)
SmackDown commentator Booker T had his fingers crossed in the hopes that Divas Champion Kelly Kelly would face Brie Bella in a Pillow Fight, but the Raw Roulette wheel instead mandated that the Divas would compete in a Submission Match. Even though no actual pillows were present, feathers did indeed fly between these battling beauties.

Coming off her momentous Divas Title victory one week earlier on Raw, the newly minted champion held nothing back against the feisty former titleholder, giving the WWE Universe an idea of what to expect when the rivals collide once again in a Divas Title rematch at WWE Money in the Bank. After putting Brie away with a Boston crab, Kelly Kelly found herself on the receiving end of a Bella beatdown when Nikki entered the fray. Thankfully, there was an angel in Sin City in the form of Eve, who assisted her friend in turning back the twins. 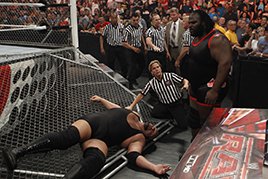 Always knowing a good opportunity when he sees it, the sly Mexican Aristocrat escaped the cage through the open doorway as Henry continued to batter Show. In a terrifying display of ferocity, Henry then nailed the giant with the steel door, sending him crashing through the cage wall itself.

Kofi Kingston def. U.S. Champion Dolph Ziggler in a Raw Roulette Non-title Player’s Choice Match (WATCH | PHOTOS)
Vickie Guerrero’s earned no shortage of nicknames during her WWE career, but “Lady Luck” certainly isn’t one of them. As Kofi Kingston prepared to spin the wheel to determine the stipulation for his non-title bout with Vickie’s business associate, United States Champion Dolph Ziggler, the shrieking she-devil intervened and demanded to take the wheel herself. Unfortunately for Vickie – but fortunately for The Dreadlocked Dynamo – the Raw Roulette wheel landed on the “Player’s Choice Match” option, which Kingston used to bar her from ringside.

Attaining a measure of retribution after Ziggler stole a victory and a title defense in their 2-out-of-3 Falls Match one week earlier on Raw: Power to the People, Kingston proved to his longtime rival that there are few Superstars that can withstand his controlled frenzy, putting away the blond blowhard with Trouble in Paradise from out of nowhere.

Following this key victory, Kingston aims to keep this momentum going as he prepares for the Raw Money in the Bank Ladder Match in three weeks, when he will clash with Evan Bourne, The Miz, Rey Mysterio, Alex Riley, Jack Swagger, R-Truth and Alberto Del Rio.(MATCH PREVIEW) 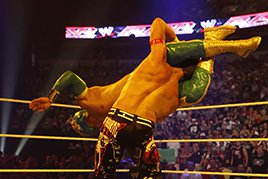 Sin Cara def. Evan Bourne in a Raw Roulette No Count-out Match (WATCH | PHOTOS)
Ask and you shall receive. After a tabulation mishap prevented the WWE Universe from witnessing international sensation Sin Cara battle Evan Bourne on Raw: Power to the People, WWE ensured that the high-flyers would collide just one week later in Las Vegas. In a No Count-out Match decided by the Raw Roulette wheel, the aerialists delivered thrills that were more than worth the seven-day wait.

In the end, the masked marvel overcame the speed and agility of “Air” Bourne, securing a pinfall victory with a stunning aerial maneuver, leaving Las Vegas with his remarkable WWE undefeated streak intact.

Kane def. CM Punk in a Raw Roulette Mystery Opponent Match by Count-out
(WATCH | PHOTOS)
Whenever The Big Red Machine hits the ring, betting on red seems like a no-brainer. Knowing that his days in WWE are numbered, and that any injury could stack the odds against him in his WWE Title encounter with John Cena at WWE Money in the Bank, CM Punk escaped Kane’s fiery onslaught by exiting the ring and intentionally getting himself counted out. 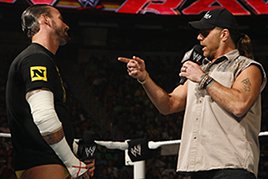 CM Punk interrupted Shawn Michaels
(WATCH | PHOTOS)
WWE Hall of Famer Shawn Michaels spent his entire in-ring career in the hunt – whether it be for thrills, competition or championship glory. With that in mind, it’s no surprise that the retired HBK is spending a great deal of his spare time proving his mettle against some of the most cunning game imaginable in the great outdoors, a pastime Michaels was eager to share with the WWE Universe as he kicked off a special Raw Roulette edition of Monday night’s hottest show.

As Michaels announced the premiere of his new hunting and lifestyle program called Shawn Michaels’ MacMillan River Adventures, debuting the following night on the Outdoor Channel, a brash CM Punk disrespectfully interrupted and threatened the returning Showstopper, reminding him and the entire WWE Universe that once his contract expires at WWE Money in the Bank on July 17, that will be the last time we’ll see The Second City Savior – and the WWE Championship.

After HBK dispatched WWE Tag Team Champion David Otunga with some Sweet Chin Music, Raw’s anonymous General Manager chimed in to tell Punk that since The Straight Edge Superstar has only three Mondays left in WWE, they’re going to count. With a spin of the wheel, the New Nexus overlord found himself facing a mystery opponent: Kane! If that wasn’t enough, Michaels tuned up the band again for Otunga’s tag team partner Michael McGillicutty, ensuring that, given Mason Ryan’s absence due to injury, Punk would face The Devil’s Favorite Demon without his armbanded lackeys.