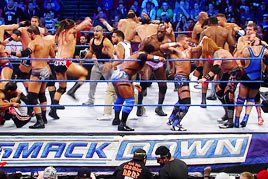 With such a prestigious opportunity on the line, the competition was fierce from the word go. The desire to have a chance at the World Heavyweight Title created a slew of incredible moments including Primo eliminating his own cousin Epico, an action-packed struggle between Primo and Justin Gabriel to stay in the match and Hunico and Ted DiBiase eliminating each other.

In the end, it would all come down to four Superstars: Ezekiel Jackson, Drew McIntyre, David Otunga and the unlikely Santino Marella. With the WWE Universe behind him, Santino eliminated Drew. Then, minutes later when Jackson charged toward him, the Italian Superstar pulled down the rope, causing The Personification of Domination to fall to the ringside floor.

David Otunga quickly looked to pick up the pieces, launching a major offensive on his one remaining roadblock to glory. But, no matter what he did, he could not overcome Santino's spirit. And, when Otunga got a running start to hurl his resilient opponent over the top rope, Santino countered, sending John Laurinaitis' legal counsel to his defeat. Santino Marella survived the odds and would be heading to WWE Elimination Chamber! (MATCH PREVIEW)

Tamina Snuka & Alicia Fox def. Beth Phoenix & Natalya (WATCH | PHOTOS)
Just when it looked like Alicia Fox was about to tap-out to Natalya's Sharpshooter, the referee was suddenly overcome by a terrible odor in the vicinity of the Diva action. As Natalya began to argue argued with the official, A-Fox promptly tagged in Tamina, who overcame the third-generation Diva with a splash off the top rope. 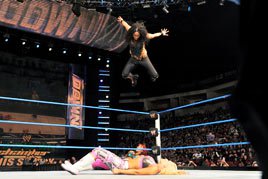 When Beth Phoenix charged after her No. 1 contender after the bell, “The Warrior Princess” caught her with a powerful kick. But, when she tried for a follow-up splash, The Glamazon got herself out of the ring at the last second. But, just who will walk out of WWE Elimination Chamber with the Divas Championship remains to be seen. (MATCH PREVIEW) 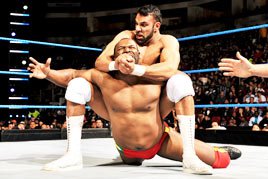 World Heavyweight Champion Daniel Bryan def. Sheamus by Disqualification (WATCH | PHOTOS)
With both Randy Orton and Big Show gone from the building, a bragging Daniel Bryan emerged to declare that he would prove everyone wrong yet again by beating the odds and defending his title at WWE Elimination Chamber this Sunday. Bryan then demanded ring announcer Lilian Garcia declare him the winner of his scheduled match with WWE's Apex Predator by forfeit. But, Theodore Long soon burst his bubble, informing him that he would be facing Sheamus instead. 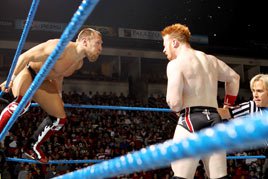 In the climax of the knockdown drag-out showdown that followed, the World Heavyweight Champion purposely provoked the ire of The Great White, spitting directly in his face. When the referee tried to separate the angry Celtic Warrior from Bryan, Sheamus threw the official to the ground – bringing the disqualification defeat upon him. Once again, Daniel Bryan walked out victorious due to controversial circumstances. 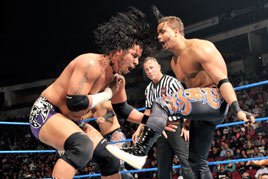 WWE Tag Team Champions Epico & Primo def. The Usos (WATCH | PHOTOS)
When a confident Jimmy Uso leaped at Primo off the top rope to deliver the splash, his resourceful adversary picked up his knees to block the assault. This set up the WWE Tag Team Champion to hit the Backstabber for the victory, serving as the prelude to another sultry dance by Rosa Mendes.

Hunico def. Ted DiBiase (WATCH | PHOTOS)
One week ago, Ted DiBiase scored a quick win over Hunico, despite the fact that the gutsy Superstar was competing with a still-injured wrist. This week, after DiBiase exacerbated his injury while executing a fierce dropkick, Camacho grabbed his damaged appendage and pulled it over the ropes with great force. This disruption allowed Hunico to roll his opponent up for a quick victory of his own. 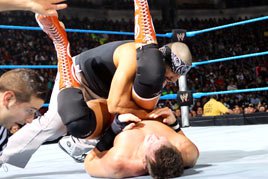 Big Show destroys SmackDown General Manager Theodore Long's office (WATCH)
Demanding a match with World Heavyweight Champion Daniel Bryan – who attacked him with the World Title on Raw SuperShow – a furious Big Show hit the WMD on Mark Henry and destroyed Teddy Long’s office in an absolute rage. Despite Teddy's attempts to get extra security, in the end, it was the giant that later voluntarily vacated the arena. 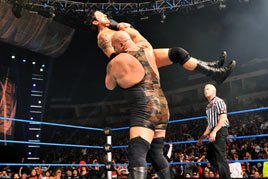 Big Show & The Great Khali def. Wade Barrett & Intercontinental Champion Cody Rhodes (WATCH | PHOTOS)
In a match between SmackDown Elimination Chamber participants, Big Show teamed with The Great Khali against the crafty combination of Wade Barrett and Cody Rhodes. When The World's Largest Athlete tagged into the match, the fired up giant unleashed an absolutely dominant assault on both of his opponents. Hurling Rhodes backwards out of the ring with tremendous force, the enormous competitor overcame The Barrett Barrage with a devastating chokeslam.

As the smoke cleared, Big Show delivered the WMD to Khali, sending the message that it will truly be every Superstar for himself this Sunday in the SmackDown Elimination Chamber Match. (MATCH PREVIEW)

SmackDown General Manager Theodore Long Takes Randy Orton out of Elimination Chamber (WATCH)
Due to a concussion suffered at the hands Daniel Bryan on Raw four days earlier, The Viper was told by Teddy Long that he will not be cleared to compete on SmackDown or the Elimination Chamber in two days. Knowing Orton's temperament, the GM had security waiting to meet him outside his office to escort him out of the building.

SmackDown results, Jan. 28, 2022: Rollins gets inside Reigns’ head one day before Royal Rumble