Despite his attempts to wiggle out of the main event showdown on two separate instances during SmackDown (WATCH), Bryan’s match with WWE’s Apex Predator quickly became an intense struggle for supremacy between two incredible competitors. And in the crucial final moments of their fierce battle, Orton prepared to hit the RKO on his prey. But, the slippery champion managed to escape the ring at the last second. 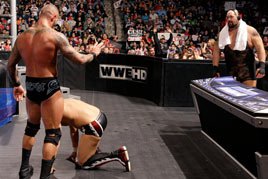 Grabbing his title, Bryan suddenly lunged at Big Show, inciting The World’s Largest Athlete to retaliate and hurl his adversary back into the ring. There, Orton did hit the RKO, but it was too late. By putting his hands on the champion, Show had gotten him disqualified. Frustrated over the loss, the serpentine Superstar began shoving the giant, igniting a vicious brawl that continued as SmackDown came to a close.

After SmackDown went off the air, Big Show and Randy Orton continued to clash – and WWE.com cameras captured it all! (WATCH EXCLUSIVE FOOTAGE)

Ted DiBiase def. Hunico (WATCH | PHOTOS)
Medically cleared after his already broken wrist was further injured by Hunico and Camacho's vicious attack two weeks ago, Ted DiBiase returned to take on the former. Hunico wasted no time going after his gutsy foe’s damaged appendage. However, as he continued to work the arm, the resourceful DiBiase rolled him up for the quick pinfall. 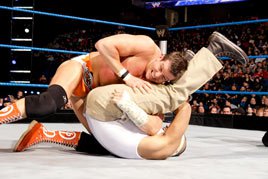 Michael Cole's interview with AJ turns into a war of words (WATCH | PHOTOS)
Still wearing her neck brace from the accidental collision with Big Show last month, AJ came to the ring to be interviewed by Michael Cole. Stating that she has never blamed the giant for her injury, AJ tore into the outspoken ring announcer for never believing in her boyfriend Daniel Bryan, as well as for insulting both of them and the entire Divas division. Accusing him of “stirring up trouble,” the courageous Diva referred to her interviewer as a “bias, obnoxious jerk.”

A furious Cole fired back, lashing back by repeating speculation he had supposedly heard from others: that "Bryan had set her up to get injured," that the champion "had no guts" and that AJ herself "had no self-respect."

Bryan came to the ring and a tirade by the self-proclaimed “role model” ensued. The vegan Superstar claimed that, unlike the Super Bowl-watching WWE Universe, he actually cared about rycycling, the environment and AJ. He then said he was leaving to take his girlfriend home in a Prius. But, before he could, General Manager Theodore Long stopped him in his tracks, informing him that if he did take-off – thereby not facing Randy Orton – he would lose his World Title. 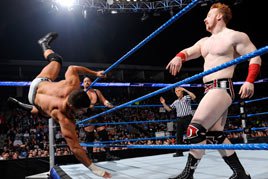 While talking to Tyson Kidd, Natalya passed gas, then blamed it on the last graduate of the famed Hart family dungeon (WATCH) 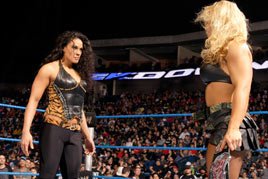 When The Fabulous Firebird opted to continue her assault on Fox after the bell, "The Warrior Princess" Tamina emerged. Without either Diva delivering a single blow, the intense stare down that ensured spoke volumes, until the smiling Divas Champion opted to take her leave.

The Great Khali def. Jinder Mahal (WATCH | PHOTOS)
Before taking on The Great Khali, Jinder Mahal proclaimed to the WWE Universe that when he beat his gigantic brother-in-law, he would demand to replace him in the SmackDown Elimination Chamber Match on Feb. 19. But, it was not to be. In his first match on SmackDown in four months, The Punjabi Nightmare triumphed over Mahal with the Punjabi Plunge. 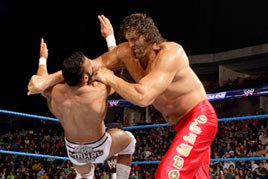 SmackDown heats up as Sheamus shares the ring with three combatants of the SmackDown Elimination Chamber Match (PHOTOS)
Not knowing who the respective World Champions will be after WWE Elimination Chamber, Sheamus reiterated his point from one week ago that he would not reveal which title he will seek at WrestleMania until after the upcoming pay-per-view. 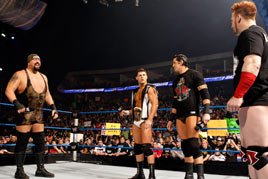 Wade Barrett interrupted, insisting that Sheamus challenge the WWE Champion – claiming that The Barrett Barrage could and would beat him after he triumphed in the Chamber and became the new World Heavyweight Champion. Intercontinental Champion Cody Rhodes also came forth, warning he will be walking into WrestleMania the first-ever dual World Heavyweight and Intercontinental Champion.

Big Show emerged, excited about the prospect of leaving the Chamber victorious and then facing The Great White on The Grandest Stage of Them All. When Barrett and Rhodes attempted to mock the giant as a "WrestleMania punch line," Big Show and The Celtic Warrior knocked both of them out of the ring. Later, a main event match between Big Show & Sheamus vs. Barrett & Rhodes was set by SmackDown General Manager Theodore Long.

Refresh for the latest SmackDown match outcomes, photos and videos.