"I would like @chrisbrown fight somebody that can defend themselves," Punk tweeted out to his more than 650,000 followers on Monday before Raw SuperShow. 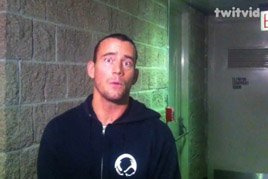 Brown shot back at the WWE Champion Monday in this since-deleted tweet. "@CMpunk needs more followers. He's such a leader! Not to mention the roids hes on has made it utterly impossible for him pleasure a women." The singer continued, "@CMpunk contact my assistant and I'll have em send u an autographed pic for my biggest FAN!!!"

In 2009 Brown was convicted of felony assault against singing sensation Rihanna and was recently criticized for a Twitter outburst after this year's Grammys.

CM Punk responded Tuesday evening with a video reply to Brown "@CMPunk http://twitvid.com/4CAPE - This must be said."

Brown replied minutes after Punk's video was posted on Twitter. "@cmpunk the video u just posted was cute! It's so funny how defensive u are," he continued. "And the fact that I really don't know who you are and could give a [expletive] is the funny part! I really hope this 15 minutes of fame is paying you for the long run becuz music last forever! Wrestlers come and go according to ratings!"

Before Chris Brown seemingly signed off for the night, telling his Twitter followers it was time to get "back to the music," his 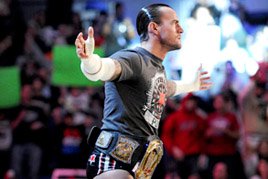 hashtag #Notnopunks was the No. 1 trend on Twitter, while WWE Champion Punk entered the ring for his match against World Heavyweight Champion Daniel Bryan on a special live SuperSmackDown.

But Brown wasn't finished Tuesday. He tweeted again "Note:today will be the last day I bring @cmpunk existence up!The confrontations that people continuously bring my way are very amusing. Cuz honestly, that [expletive] is too time consuming to argue wit every person who has their own issues to deal with!"