After the CM Punk-Chris Brown Twitter war took over the internet on Tuesday (STORY), the WWE Champion received support from late night talk show host Conan O'Brien and made the media rounds, speaking to TMZ, Hot 97 and HLN.

During the opening monologue of O'Brien's show "Conan," the late night funnyman weighed in on the Punk-Brown Twitter beef. (WATCH)

CM Punk's first stop on Tuesday was an in-studio interview with Hot 97 morning hosts Cipha Sounds, Rosenberg and K. Foxx. During the interview, fans both of CM Punk and Chris Brown called in to voice their opinion of the situation. After K. Foxx asked the WWE Champion why he chose now to speak out about Brown, Punk replied, "He's acted as if winning a Grammy has granted him immunity and erased his mistakes, somebody needs to take Twitter away from him." (WATCH) 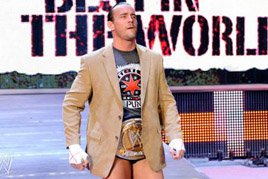 The WWE Champion next called in to TMZ's live show with Harvey Levin, where he reiterated his position on the Twitter back-and-forth with Brown and wanting to take on the Grammy winner in a match where all the proceeds would go to charity. (WATCH)

Punk ended the night on HLN as the "Showbiz Newsmaker," telling host AJ Hammer the origin of the tweet to Chris Brown. "I was responding to my followers about who I should face at WrestleMania," Punk said. "One of my followers had mentioned Chris Brown, and I thought 'Yeah, that would be a good idea.'" (WATCH)

Stay with WWE.com as we continue to cover the CM Punk-Chris Brown story.