WWE Raw SuperShow results: Who is "The Best in the World?"

OKLAHOMA CITY – WWE COO Triple H gave his answer to The Undertaker's WrestleMania XXVIII challenge, and The Deadman responded. Chris Jericho earned the right to be the final entrant into Raw's Elimination Chamber Match and John Laurinaitis announced that WWE Hall of Famer Shawn Michaels will be on Raw SuperShow next week!

The menacing Kane terrorized Eve (WATCH)
Continuing his quest make John Cena embrace hate, Raw SuperShow ended with The Big Red Monster cornering Eve backstage. Kane told her that he fears for the safety of anyone who gets in the way of his quest to make Cena embrace the hate.

Chris Jericho def. WWE Champion CM Punk, R-Truth, Kofi Kingston, The Miz & Dolph Ziggler (PHOTOS | WATCH)
The stakes were certainly high in Raw SuperShow’s main event - the winner would be the final entrant into Raw’s Elimination Chamber Match at WWE Elimination Chamber. That prospect was enough to fuel each Superstar involved in the Six Pack Challenge as the winner would be able to conserve the most energy inside the unforgiving structure. 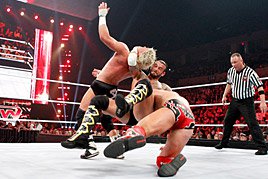 Before the contest on Raw SuperShow turned into a free-for-all, Truth, Kingston, Miz and Ziggler all focused their attention on Jericho, no doubt retaliating for the first-ever Undisputed Champion’s comments earlier in the evening. The WWE Champion waited, grabbed Miz and tried to take the early victory. From this point on, the match became every Superstar for himself as the battle raged in and out of the ring. However, with Miz outside the ring, R-Truth attempted to hit a somersault dive over the ropes but The Awesome One moved out of the way. This resulted in a very hard landing for Truth, and WWE doctors determined that Truth was unable to continue in the match. (INJURY UPDATE)

As the battle raged, none of the Superstars were able to maintain any momentum or an advantage for very long. This only kept the WWE Universe in Oklahoma City on the edge of their seats, no doubt making them envious of their counterparts in Milwaukee who will witness these Superstars battle inside the Elimination Chamber in two weeks. After tossing Chris Jericho from the ring, CM Punk seemed to have a clear path to victory when he caught Ziggler with the GTS. With the ring cleared, CM Punk pinned The Show Off but Jericho pulled the WWE Champion out of the ring, tossed him over the announce table and stole the victory!

John Laurinaitis announced John Cena vs. Kane in an Ambulance Match at WWE Elimination Chamber. (FULL STORY) He also announced that Shawn Michaels will be on Raw SuperShow next week! (WATCH)

Kelly Kelly, Eve, Alicia Fox and Tamina def. Beth Phoenix, Natalya and The Bella Twins (PHOTOS | WATCH)
Divas Champion Beth Phoenix believes there are no Divas that can compete on her level. In a Eight-Diva Tag Team Match on Raw SuperShow, it seemed that The Glamazon did not want to bother battling any of the Divas on the opposing team. She aggressively tagged in Brie Bella who took issue with the Divas Champion being so assertive. The argument that broke out allowed Tamina to gain the upper hand in the contest and secure the victory with a Superfly Splash. From outside the ring, The Glamazon watched Tamina with great interest, perhaps seeing a new and formidable opponent. 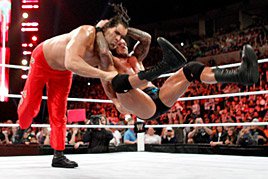 The Great Khali & Randy Orton def. Intercontinental Champion Cody Rhodes & Wade Barrett (PHOTOS | WATCH)
It certainly seemed like a peculiar pairing, but The Great Khali and Randy Orton teamed up on Raw SuperShow and dominated the contest early. However, the teamwork between The Viper and The Punjabi Playboy was definitely uneasy as both Superstars aggressively tagged each other in. This allowed Rhodes and Barrett to gain an advantage over WWE’s Apex Predator. Each competitor seemed poised to outdo each other, as all four ring warriors will battle inside SmackDown’s Elimination Chamber. As Orton seemed to have the victory well within his grasp, The Punjabi Playboy once again tagged himself in to finish off the Intercontinental Champion with a huge chop. The Viper was not pleased about Khali stealing the victory and confronted the giant. WWE’s Apex Predator ducked a huge chop and took down The Punjabi Superstar with a huge RKO.

WWE Champion CM Punk confronted Chris Jericho (PHOTOS | WATCH)
Chris Jericho finally spoke his mind on Raw SuperShow. WWE’s first-ever Undisputed Champion delivered a bold statement and message to the WWE Universe and all the Superstars and Divas, that they are all “Jericho wannabes.” Jericho explained that he did everything before everyone else, that he was the trendsetter in WWE. He then set his sights on WWE Champion CM Punk, claiming that he, not Punk, was “the best in the world.”

As Jericho continued to present his case, The Voice of the Voiceless made his way to the ring, itching to use his pipe-bomb. However, as Punk stood face to face with Jericho, he dropped the microphone and proudly held the WWE Championship high in the air. The Straight Edge Superstar turned his back, giving Jericho a chance to attack. When Jericho did not attack, CM Punk left the ring and returned to the locker room. 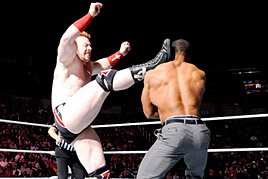 Sheamus def. David Otunga (PHOTOS | WATCH)
David Otunga made his way to the ring to express his support for John Laurinaitis to remain Raw's Interin General Manager. As a result, WWE COO Triple H announced that Otunga would have a match at that very moment. His opponent was the winner of the 2012 Royal Rumble Match, Sheamus. Otunga was clearly unprepared for the contest and was forced to compete in his business casual attire, but The Celtic Warrior was ready to unleash his fury. While WWE's resident lawyer did build a small amount of momentum, The Celtic Warrior dismissed the case with a powerful Brogue Kick and sentenced Otunga to defeat.

NASCAR driver Carl Edwards informs John Cena that the Cenation leader will be the honorary starter of the Daytona 500. (FULL STORY | WATCH)

Big Show def. World Heavyweight Champion Daniel Bryan (PHOTOS | WATCH)
The intense rivalry between Big Show and World Heavyweight Champion Daniel Bryan spilled over to WWE Raw SuperShow. The rivalry became heated after The World's Largest Athlete inadvertently trampled Bryan's girlfriend, AJ, during a battle on SmackDown. With a neck brace helping her ease the pain, AJ made her way to the ring to support the World Champion on Raw SuperShow.

Using his agility and athleticism, Bryan took an early advantage, but Big Show's sheer size quickly shifted momentum in his favor. As the melee spilled to the outside of the ring, there were a number of close calls involving AJ potentially being injured. As The World's Largest Athlete charged Bryan, the World Champion ducked out of the way and AJ was nearly trampled again. This prompted Daniel Bryan to grab his girlfriend and retreat from ringside. As a result, Big Show was declared the winner by count-out, 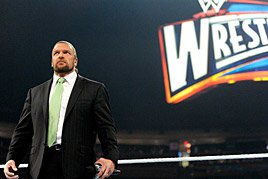 Triple H answered The Undertaker’s Challenge (PHOTOS | WATCH)
Before WWE COO Triple H addressed the situation involving The Undertaker, he informed the WWE Universe that Executive Vice President of Talent Relations John Laurinaitis’ fate as Interim Raw General Manager would be decided by the Board of Directors later.

When The Game turned his attention to The Deadman, he acknowledged that The Phenom’s return to Raw SuperShow last week was indeed to challenge Triple H to a rematch at WrestleMania XXVIII. The Cerebral Assassin spoke of his respect for everything that The Undertaker has done in his career. However, The Game also claimed that last week when The Phenom returned, he did not feel intimidated by The Undertaker. WWE's COO played two videos, one that highlighted the dominant force that The Deadman has represented in WWE, and another that captured the aftermath of their epic struggle at WrestleMania XXVII, when The Phenom had to be carried out on a stretcher. Triple H turned down The Undertaker's challenge, and claimed he had too much respect for The Deadman and saying "it's over."

Before The Game could leave the ring, a video played showing The Undertaker in a room watching clips from the physical battle at The Show of Shows last year in Atlanta. The Phenom's message for Triple H was clear, give The Deadman another epic WrestleMania match, and have one more chance to end The Streak and further cement the legend of The Game.

Main event announced
Raw SuperShow kicked off with the announcement of the evening’s main event.  Raw Elimination Chamber participants; CM Punk, R-Truth, Kofi Kingston, The Miz, Dolph Ziggler and Chris Jericho would square off in a Six Pack Challenge to determine whose Elimination Chamber pod would be the last to open at the pay-per-view event.