There is no instant replay in WWE, but that’s not stopping Interim Raw General Manager John Laurinaitis from righting a questionable call made on Monday’s Raw SuperShow.

In a competitive match between WWE Champion CM Punk and Jack Swagger, Punk was awarded a pinfall victory – although Swagger’s left shoulder was visibly off the canvas when WWE referee Jack Doan issued the three-count. CLICK HERE to see the call.

“Clearly, the referee made an incorrect call,” Laurinaitis said when a WWE.com reporter caught up with him immediately after the match in the locker room. “To be fair, I’m giving Swagger a title match next week.” 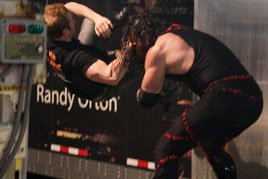 Later on Raw SuperShow, viewers learned it's United States Champion Zack Ryder who The All-American American will challenge for his title. But by night’s end – things took an evil turn for Ryder – who was chokeslammed by The Big Red Monster Kane and seriously injured. (WATCH | MORE ON RYDER’S CONDITION)

Considering Ryder’s injuries, if Monday's U.S. Title Match does indeed take place, Swagger could be poised to get out of his current funk in a big way by capturing championship gold. And, Vickie Guerrero is no doubt salivating at the chance of having a champion in her stable once again. 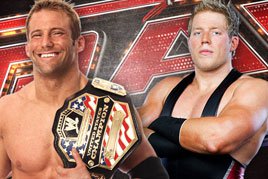 But Vickie's pride and joy, Dolph Ziggler, will have his work cut out for him against Punk at Royal Rumble now that Punk's controversial Raw SuperShow win ensured she and Swagger are banned from ringside during the match – all as a result of the stipulation put in place by Laurinaitis to be fair.

Why do it?
Even with the referee’s poor decision, it begs the question: Why would Laurinaitis offer such an opportunity to Swagger? Ever since his brief two-month reign as World Heavyweight Champion in 2010, what has Swagger done to earn such a chance? Certainly, his name has not been mentioned among those worthy of challenging World Heavyweight Champion Daniel Bryan for his title. 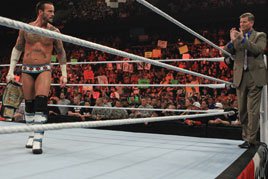 And in hindsight – after witnessing Kane’s hellacious attack on Ryder – is it truly fair for the United States Champion to have to defend his title? If Laurinaitis is truly interested in being fair, why hasn’t he already called off the match for Monday’s Raw SuperShow? One could argue that Laurinaitis is setting up Ryder to lose his title.

Finally, what might Laurinaitis’ decision to let this match go on say about the judgments he may make when he himself is special guest referee for the WWE Championship Match between CM Punk and Dolph Ziggler at the 25th anniversary of Royal Rumble? If he can’t be impartial as the interim Raw GM in this instance, how is he supposed to be fair as a referee with the WWE Championship on the line?

We already know what WWE Hall of Famer Howard Finkel thinks about Laurinaitis (MORE), but what do you think of the Interim Raw General Manager’s decisions lately? Sound off now at WWE InterAction.