CM Punk def. Alberto Del Rio; Del Rio assaulted rivals with a steel chair
(WATCH | PHOTOS)
In an incredible preview of what is to come this Sunday in their Triple Threat Hell in a Cell Match, CM Punk and Alberto Del Rio vented their many frustrations with one another as WWE Champion John Cena looked on from the commentary table. The Voice of the Voiceless sealed a pinfall victory, gaining some much-needed momentum before stepping inside Satan’s Structure.

After the match, the Cell itself – which had been hanging above the arena for the duration of the evening – descended upon Cena, Del Rio, Punk and The Mexican Aristocrat’s intervening ring announcer, Ricardo Rodriguez. Punk and Cena pummeled Rodriguez with the Go to Sleep and the Attitude Adjustment respectively, then turned their attention on one another – unwittingly giving Del Rio an opportunity to strike. Bashing both Superstars with a steel chair, Del Rio stood triumphant in the ring, giving his Hell in a Cell competitors a taste of things to come less than a week later inside the vile structure.

Ryan didn’t exactly gel with Swagger or Ziggler, and ultimately turned on his impromptu tag team partners. Capitalizing on this justified betrayal, Ryder pinned Ziggler for the second time in as many weeks. It looks like Ziggler has even more to complain about on Twitter besides Hugh Jackman’s “sucker punch” the week before! (MORE ON ZIGGLER’S INJURY)

United States Champion Dolph Ziggler def. Zack Ryder (WATCH | PHOTOS)
Clearly, neither U.S. Champion Dolph Ziggler nor Jack Swagger are vying to become “Broski of the Week” anytime soon. With a little help from The All-American American, Ziggler retained his star-spangled title, much to Vickie Guerrero’s delight. Then, as ordered by WWE’s resident cougar, Swagger and Ziggler continued to attack The Long Island Loudmouth until WWE Tag Team Champions Air Boom charged the ring and fought off the blond blowhards.

Since it was clear that Vickie wanted to keep both of her clients busy on WWE Raw SuperShow, SmackDown General Manager Theodore Long announced that Kofi Kingston & Evan Bourne would team with Ryder to face Swagger, Ziggler and a partner of Vickie’s choosing – if she could find someone in three minutes!

WWE Champion John Cena def. Christian by Disqualification; Alberto Del Rio attacked The Champ (WATCH | PHOTOS)
A lot of things have happened inside the callous confines of Hell in a Cell, but the WWE Universe has never witnessed a Triple Threat Match waged inside The Devil’s Playground. Despite the horrors that surely await him, WWE Champion John Cena had an air of confidence about him as he addressed the WWE Universe about his collision with Alberto Del Rio and CM Punk just six days later.

Cena locked up with Christian in a non-title showdown, but it was the verbal sparring between The Mexican Aristocrat and The Second City Savior on commentary that really enthralled our fans watching the action from home. The ringside confrontation got physical when Cena threw Christian over the announce table and into Punk. As Punk and Cena stared each other down, Del Rio assaulted The Straight Edge Superstar, then attacked Cena with an enziguri that resulted in Christian’s disqualification. Will Del Rio’s destiny be reclaimed at Hell in a Cell?

World Heavyweight Champion Mark Henry assaulted The Great Khali
(WATCH | PHOTOS)
World Heavyweight Title holder Mark Henry was fined $250,000 for his actions on SmackDown, but it was The Great Khali who would pay an even greater price. The Punjabi Superstar motioned to the WWE Universe before his bout with Henry, The World’s Strongest Athlete launched a devious sneak attack, cutting the goliath down to size with a World’s Strongest Slam. At this rate, Henry’s “Hall of Pain” is going to need a new wing.

Beth Phoenix & Natalya def. Divas Champion Kelly Kelly & Eve
(WATCH | PHOTOS | MORE KELLY KELLY)
Beth Phoenix is intimidating enough when she’s in a good mood, but when she’s angry, watch out. After failing to capture Kelly Kelly’s Divas Championship for a second time at Night of Champions in her hometown of Buffalo, N.Y., The Glamazon teamed with Natalya to take on the blonde bombshell and her longtime pal Eve. Beth and her Hart Dungeon-trained cohort were relentless, and scored a victory over the so-called “Cinderellas” when Beth hit Kelly Kelly with the Glam Slam.

Later in the night, it was announced that Beth will once again challenge Kelly Kelly for the Divas Championship at WWE Hell in a Cell. Will the Phoenix rise in New Orleans? (MATCH PREVIEW)

Cody Rhodes won a 10-Man Battle Royal for the Intercontinental Championship
(WATCH | PHOTOS)
Still feeling the effects of Randy Orton’s brutal attack with the ring bell three night earlier, Cody Rhodes’ disrespect toward The Game nearly cost him the Intercontinental Championship. After outlasting eight elite Superstars in a COO-mandated Battle Royal for the illustrious title, the twisted and bitter Rhodes found himself face-to-face with Sheamus.The Celtic Warrior seemed primed to add the Intercontinental Title to his impressive list of accolades, but Christian interfered in the match, distracting his Hell in a Cell opponent and allowing Rhodes to send The “Great White” over the top rope with the aid of his protective mask.

Not content with merely costing Sheamus the title, Christian further brutalized his rival with a sinister post-match attack that sent The Celtic Warrior careening into the turnbuckle.

Superstars criticized WWE COO Triple H (PHOTOS)
Further explaining the firing of The Miz & R-Truth one week earlier, Triple H continued to lay down the law. Fining World Heavyweight Champion Mark Henry a $250,000 fine for putting his hands on Jim Ross and sending  Jerry “The King” Lawler through the announce table on SmackDown, The Game then issued a stern warning to the entire locker room, emphasizing that no single Superstar is bigger than WWE. (WATCH: WHY MIZ & TRUTH WERE FIRED) 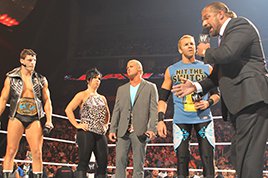 Taking umbrage with The King of Kings’ leadership ability, Vickie Guerrero, U.S. Champion Dolph Ziggler, Intercontinental Champion Cody Rhodes and Christian confronted the COO, demanding justice. Justice was served swiftly by The Cerebral Assassin, but not in the manner that any of these dissenters would have liked.

Sick of Christian’s persistent whining for “one more match,” Triple H instead gave him three. Per The Game, the disgruntled Superstar would face Sheamus in six days at WWE Hell in a Cell, Randy Orton this Friday on SmackDown and WWE Champion John Cena later in the night!

As for Ziggler, he would defend his title against the very Superstar that defeated him (with Hugh Jackman’s help) one week earlier on WWE Raw SuperShow – none other than Long Island Iced Z, Zack Ryder.

Finally, Triple H passed judgment on Rhodes, who would immediately be forced to defend his Intercontinental Title in a 10-Man Battle Royal!