The Champs are here

HAMPTON, Va. — As identical gleaming prizes reflected the faces of both the dogged John Cena and the vilified CM Punk in the same ring on Raw, the WWE Universe instantly came to recognize that, at least for now, The Champs are here.

Two became one incredible sight at the conclusion of Monday Night Raw as newly minted WWE Champion John Cena came head-to-head, tight fade-to-slicked back mane with a reemerging Punk, who came complete with his own absconded WWE Title (WATCH). Implicitly challenging the legitimacy of Cena’s proud championship victory, it was a spectacle many longed to see since the Chicago native’s controversy-stained final match at Money in the Bank in which the renegade fled the scene of the ultimate squared circle crime in his hometown. (STORY | PHOTOS)

As if he hadn’t already done enough damage – which included the tainted 50-year legacy of the WWE Title and dethroning of Mr. McMahon as WWE Chairman (STORY | PHOTOS) – CM Punk crept back into the spotlight following an unprecedented pair of WWE Title bouts in a single night. 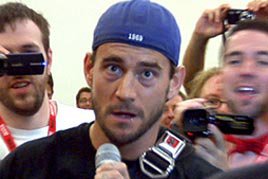 Somehow, an evening that started without a definitive champion progressed in ways none could have foreseen: Rey Mysterio winning his first-ever WWE Championship, Cena overcoming Rey for an incredible ninth WWE Title reign, then the culmination of a title-themed Raw with two plausibly rightful WWE Champions.

Days earlier, The Straight Edge Savior slithered into San Diego Comic-Con 2011 and interrupted a panel including Bret Hart, Mysterio and Triple H, who engaged in a verbal exchange with Punk. The suited Cerebral Assassin, whose actions haven’t been so Corporate since 1999, genuinely welcomed the AWOL competitor to return to WWE to defend the championship he’d pilfered at Money in the Bank. (EXCLUSIVE FOOTAGE)

Amid his impactful acts on Monday night, WWE’s new Chief Operating Officer has not only re-established Jim Ross at the Raw announce booth (WATCH) and given a long-awaited opportunity to Zack Ryder (WATCH), but it seems he's also re-signed the silver tongued Second City Saint to a new WWE contract. 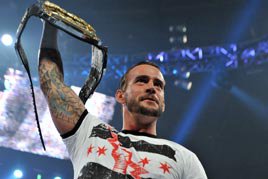 In the fallout of Raw on USA Network, CM Punk told the sold-out audience in the Hampton Coliseum that he's back. (EXCLUSIVE FOOTAGE) Does the bold, new era ushered in by The Game include the presumed “persona non grata,” Punk? If so, it could be possible that one of Punk’s demands of Triple H – who took control of WWE before the finals of the WWE Title Tournament – was to be honored as WWE Champion.

The Game, however, also found issue in John Cena’s lingering rematch that was denied him when the WWE Title exited Chicago’s Allstate Arena in Punk’s clutches. If all true, then under Triple H’s rule, for the first time in WWE history, there would be two officially recognized WWE Champions.

The suspense of Raw’s closing moments continues forth to the next Raw – and beyond – as two entitled men both tote the lustrous symbol so greatly revered in WWE for half a century. Who is the true, rightful WWE Champion? (VOTE NOW ON FACEBOOK) Are there multiple champions? Is CM Punk to blame for creating this mess by walking out on WWE? Does the WWE Universe approve of or condemn the actions of CM Punk?