GREEN BAY — Cunning and ruthless as he is, The Cerebral Assassin has taken years off the careers of many Superstars. But on Raw, even Triple H seemed to wince in ending the professional relationship between WWE and its longtime Chairman Vince McMahon.

“I’m here to inform you, Vince, that you’re relieved of your duties,” uncomfortably uttered the 13-time World Champion.

Due to “extremely questionable decisions” made by McMahon, the WWE CEO was rendered powerless and essentially fired from WWE on Monday Night Raw in a message that was visibly difficult to deliver for his son-in-law, Triple H. In Vince’s stead, a new figurehead would assume control of day-to-day operations for WWE. (WATCH)

“I can’t believe I’m going to say this, but, Vince … it’s me,” uttered The Game to his welled up father-in-law, whose vision was made manifest in the spectacle surrounding them in Green Bay.

The irony of the former Chairman’s rosy hued sport coat in receiving what was essentially his pink slip. Imagine McMahon’s own shock to learn that he, whose influence propelled the entertainment juggernaut known today across all hemispheres, was expunged from his own empire. (PHOTOS)

It was an injunction filed by a Board of Directors likely appointed by McMahon’s own hand, claiming a lost vote of confidence after countless years – a multitude of eras, even – with Vince McMahon in the lofty seat of power in WWE. Like a bull excised of its horns or a lion with its roar (plus, jaws and claws) repossessed, the WWE CEO’s authority was nullified by the business decision of an executive cabal acting on the globally renowned company’s behalf. A business decision, much like that McMahon readied to execute with the in-ring termination of John Cena until The Cerebral Assassin arrived. (WATCH) 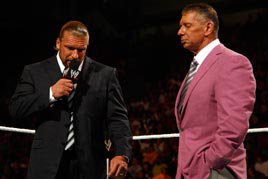 The Game interrupted The Chairman’s closing statement on Monday night, preventing Cena’s public firing. Ultimately, when it appeared The Cenation Commander-in-Chief would face “severe consequences” following his Money in the Bank defeat, it was Mr. McMahon who would experience the greatest recoil. This all after an empowered kickoff to Monday Night Raw that included the commencement of a WWE Championship Tournament as well as McMahon’s rousing address for an unforgettable night and a WWE that would be bigger, badder and better than ever. (WATCH)

The Chairman has clashed with the most revered names in WWE’s Hall of Fame in all types of combat. He’s been at the center of the most calamitous controversies at the cornerstones of squared circle memory. He’s even won a war and felled a media goliath in Ted Turner. Now, for all the respect McMahon’s earned – and commanded – by acts of both good and evil over the last several decades, he’s relegated to an esteemed parking spot at WWE headquarters and an essentially hollow nameplate on a cherry wood desk, now just a keepsake.

As the swagger of The WWE Chairman’s signature strut calms in pace following the outrageous bombshell, the WWE Universe  – who warmly, reverently bid McMahon adieu Monday night – wonders what lies ahead as WWE initiates its latest evolution captained by The Game. It begins with the crowning of a new WWE Champion in either Rey Mysterio or The Miz on the next Raw. Beyond that, just how will WWE be reshaped without the influence of Vincent Kennedy McMahon?