SAN ANTONIO – Remember the Alamo! That famous slogan was echoed throughout this Texas city after the vicious battles there in 1836. Nearly 200 years later, people are bound to remember San Antonio for a series of different battles, the ones leading up to WWE Over the Limit in just six days.

WWE Champion John Cena def. Jack Swagger (WATCH: PART 1 | PART 2 | PHOTOS)
When it comes to “I Quit” Matches, WWE Champion John Cena has a vocabulary consisting of just one word: “No.” The Miz realizes that fact and continues to try to figure a way to beat The Champ at WWE Over the Limit in just such a bout.

Earlier in the evening, Miz was allowed to choose both a match stipulation and an opponent for Cena in the night’s main event match and leveraged that to his advantage. The Cleveland Screamer chose a No Holds Barred Match and Jack Swagger as Cena’s opponent. The former World Heavyweight Champion got dirty right away, ambushing The Champ from behind. The All-American American would eventually pay for the ambush, though, when Cena snapped on an STF.

Despite Cena winning the bout, Miz was still swift to talk trash. He and hislackey, Alex Riley, attacked Cena, but The Champ pushed through the pain and chased the two from the ring, vowing that he will never utter the words “I quit.” 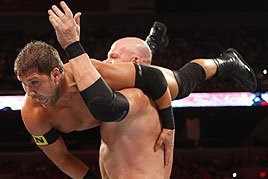 David Otunga & Michael McGillicutty def. WWE Tag Team Champion Big Show & Kane (WATCH | PHOTOS)
It would have been like trying tear down a brick wall with a plastic fork. David Otunga & Michael McGillicutty were sent by CM Punk to dismantle WWE Tag Team Champions Big Show & Kane in a non-title match. Although their chances were scant, The Second City Savior evened the odds.

As The Big Red Monster prepared to unleash fury, the leader of the New Nexus slyly dropped Kane with a well-timed kick to the back of the head from the ring apron. The blow allowed McGillicutty to pin the WWE Tag Team Champion for the victory.

If Punk can beat the WWE Tag Team Champions without even competing, how difficult will it be for him to do it again when in a match with New Nexus powerhouse as his partner on Sunday in Seattle? For tickets to the event, click here.

Michael Cole and Jerry Lawler signed match contract for WWE Over the Limit (WATCH | PHOTOS)
Michael Cole may want to invest in extra mouthwash. The “rat bastard” announcer signed a match contract with his rival Jerry Lawler for this Sunday’s WWE Over the Limit. After they had each signed, though, Cole revealed that he’d dropped in a stipulation making the contest a Kiss My Foot Match.

Unfortunately for Cole, this was before he’d ticked off his secret weapon, trainer Jack Swagger. The All-American American had been allied with Cole until the cheese-eating announcer hinted Swagger was his “sidekick.” That was enough to provoke the former World Heavyweight Champion to storm off and leave the weasely announcer wallowing with his foot in his mouth. He may want to get used to the taste. 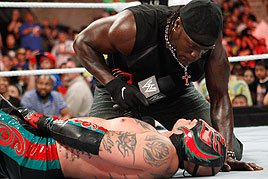 Rey Mysterio def. Alberto Del Rio by Disqualification; WWE Over the Limit Match arranged
(WATCH | PHOTOS)
The Truth is out there. Unfortunately for Rey Mysterio, it can also be pretty crafty at times. After calling out R-Truth for ambushing him last week, Mysterio waited in vain for the former rapper to show. Instead, Alberto Del Rio confronted The Master of the 619, and the two agreed to settle their vast differences in the ring.

During the bout, however, Truth finally surfaced and distracted Mysterio. When Rey finally got back on track, he nearly nailed The Mexican Aristocrat with a 619 until Del Rio’s personal ring announcer interfered, allowing Rey to win by disqualification.

After the match, Truth slid into the ring and attacked WWE’s Ultimate Underdog. The former rapping Superstar then grabbed a mic and accepted Mysterio’s earlier challenge to face off at WWE Over the Limit this Sunday in Seattle.

Kelly Kelly def. WWE Divas Champion Brie Bella in a Non-Title Match (WATCH | PHOTOS)
Kelly Kelly must have realized you can run for only so long. After weeks of avoiding the onslaught of Kharma, the beautiful blond finally confronted her fears. After she bested Brie Bella in a non-title bout, Kelly was leveled by a frustrated Brie and her sister, Nikki.

Just then, the familiar notes of Kharma’s entrance theme wafted through the AT&T Center like an ominous fog. When the braided behemoth entered the ring, The Bellas attacked. Despite their efforts, though, Kharma proved unrelenting and demolished Nikki as her sister scurried off. She then approached the object of her attention. Rather than pummel Kelly, however, Kharma simply flipped her blonde locks, flicked her forehead and laughed like a woman possessed before walking away. 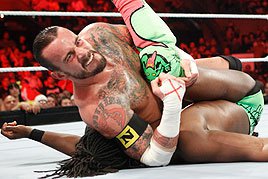 CM Punk def. U.S. Champion Kofi Kingston in a Non-Title Match (WATCH | PHOTOS)
The Second City Savior vowed to show “leadership by example.” He needed to do something after the embarrassing shellacking he and his New Nexus disciple, Mason Ryan, suffered at the hands of their WWE Over the Limit opponents, WWE Tag Team Champions Big Show & Kane.

As a result, The Second City Savior challenged U.S. Champion Kofi Kingston to a non-title match. After prevailing over the impressive Dreadlock Dynamo, Punk announced that the New Nexus were on a road to redemption and vowed that the group will regain its former dominance.

The Miz chosen to arrange the night’s main event (PHOTOS)
You’ve got to hand it to The Miz’s toady, Alex Riley – the guy is nothing if not loyal. One week after having being trapped in the STF compliments of WWE Champion John Cena, Riley was back, interrupting The Champ and heaping praise on his boss.

The WWE Champion and Miz, his adversary in an “I Quit” Match at WWE Over the Limit, stood toe-to-toe. As tensions mounted, Raw’s anonymous General Manager chimed in to announce, via Michael Cole, that, since The Champ got to choose the stipulation for their WWE Over the Limit match, The Cleveland Screamer would get to decide Cena’s opponent in the night’s main event match as well as the match stipulation. Miz grinned and deferred the decisions for later in the evening.