The Truth about the Elimination Chamber's most dangerous Superstar

When WWE Champion CM Punk, Dolph Ziggler, Chris Jericho, The Miz, Kofi Kingston and R-Truth compete in the Raw Elimination Chamber Match for Punk’s title this Sunday, they will lay it all on the line in one of WWE’s most extreme contests. Towering 16 feet in height and measuring a massive 36 feet in diameter, the Elimination Chamber is renowned for pushing participants to the limit and exacting a devastating physical toll. (MATCH PREVIEW) 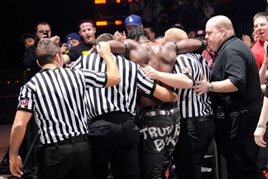 dangerous dome, the reality is that the chaos and frenzy of the Elimination Chamber play right into the hands of one of WWE’s most chaotic and frenzied Superstars – R-Truth.

On last Monday’s Raw SuperShow, R-Truth executed a high-risk slingshot somersault over the top rope onto The Miz, crashing to the ground ringside with brutal impact. (STORY)

That dangerous maneuver – which, miraculously, did not result in serious injury – was a perfect distillation not only of Truth’s explosive athleticism, but of his gameness and reckless abandon in the squared circle. These remarkable qualities define him as a the wildest of wild-card Superstars, and could propel him to victory in the Raw Elimination Chamber Match.

As he enters the chamber for the third time, it can be argued that R-Truth, respectfully, has a screw or two loose. Whether he’s searching for Little Jimmy, evening up the score with The Miz, attacking Ricardo Rodriguez or grabbing a mic to spout some new craziness, Truth often makes the WWE Universe wonder if he’s a few water bottles short of a six-pack. (PHOTOS) 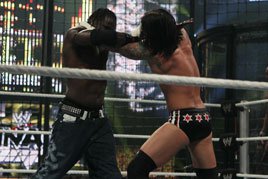 Yet it’s that eccentricity that makes for such a powerful weapon. No one – including R-Truth – knows just what he is going to do next.  His unpredictability and willingness to try anything in the ring give him a distinct advantage. He’s constantly teetering on the edge, even when no one is pushing him.

Flying under the radar leading up to the event, R-Truth is, in fact, in a great position. Even though many Superstars would be intimidated by such a perilous match, the Elimination Chamber’s most unhinged entrant could actually benefit from the pandemonium in the chained enclosure. With nothing to lose, the match’s loose cannon might just be unchained enough to win it all.

Is R-Truth crazy like a fox or just plain crazy? Will he finally get the WWE Championship, or will he “get got”? Only he knows the truth, the whole truth and nothing but the truth – and he’s not saying anything until he enters the Raw Elimination Chamber Match in Milwaukee’s Bradley Center this Sunday.

Do you think a different Superstar will win the Raw Elimination Chamber Match? Make your voice heard and discuss with other members of the WWE Universe on Facebook and Twitter. For complete coverage of the 2012 Elimination Chamber, CLICK HERE.