Clash of the Toy-tans: Rey Mysterio vs. Bam Bam Bigelow

At first glance and with no prior knowledge regarding the combatants, the summation is that Bam Bam Bigelow would utterly dominate Rey Mysterio. The name may evoke images of a prehistoric cartoon baby, but the “rubble” left in his wake was comprised of broken bodies who dared to oppose him. Truly a “Beast from the East,” Bam Bam’s imposing size and unbelievable strength put the New Jersey native in a power class reserved for the likes of Andre the Giant and Hulk Hogan. You could say that his flame-tattooed head was a representation indicative of his short fuse and volcanic temper. However, you would do so at your own 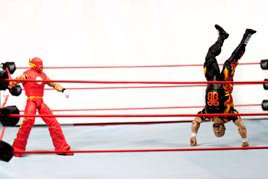 peril, and certainly outside of Bigelow’s listening range.

Initially, Rey Mysterio appears to be a masked man of fleet-footed flash, but with a 5-foot-6, 175-pound frame that provides little offensive substance to topple a behemoth like Bam Bam. Yet Mysterio didn’t become a World Champion by defeating Superstars equaling his own measure. On the contrary – he has cut down to size World Champions such as Randy Orton, Kurt Angle, CM Punk, Big Show and Kane to possess WWE’s greatest prize, and in the process earned designations like “The Biggest Little Man” and “The Ultimate Underdog.”

ANALYSIS
Despite being nine inches taller and more than twice Mysterio’s weight, Bam Bam Bigelow’s greatest advantage is an unexpected agility that defies Superstars of his stature. How many near 400-pound men have you ever seen execute a cartwheel to perfection, or climb the top rope for a moonsault? Sure, it was Bigelow’s pure might that once hurled Spike Dudley out of the ring and 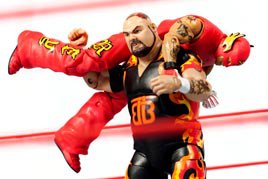 several rows deep into an audience. Yet it was his uncanny nimbleness that brought down equally footed adversaries, and ultimately helped him capture an ECW Championship.

If both Superstars have speed on their side, then what could Rey Mysterio possibly have working in his favor for this match-up? Perhaps the answer lies in the ink surrounding his body. Whereas Bam Bam’s tattoos suggest a monster fueled by a rage-filled environment, Mysterio’s denote a man of great character and loyalty, particularly for Mexico, his native San Diego and those who have shaped his life most. Such spirit is not easily quashed, even by the most formidable of foes.

The masked Superstar is also incredibly resourceful. Whereas Bigelow’s hotheadedness tended to get the better of him – WrestleMania XI comes foremost to mind – Rey expertly pinpoints and exploits an enemy’s weakness. He then resorts to the signature moves named in honor of his beloved West Coast heritage ... including a certain San Diego area code 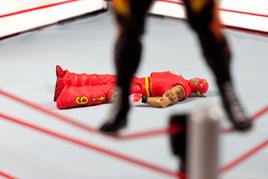 that can drop even a Beast from the East.

THE VICTOR
Don’t look for a battle of give-and-take, back and forth or any other clichés that suggest an even match-up. Aside from the occasional offensive flurry by Rey Mysterio, Bam Bam Bigelow is in full control for most of this contest. WWE's masked marvel can’t match Bigelow’s sheer power, and Bam Bam demonstrates with a cartwheel and dropkick that the agility factor isn’t as lopsided as one would assume. For Rey-Rey, to paraphrase Yogi Berra, "it's gettin' late early."

Nevertheless, no matter how hard this Goliath strikes, he simply can’t keep the modern-day David down for a three-count.

Tiring himself out, Bigelow – now so boiling-mad his fire-inked skull could cook an egg – lays Mysterio out and goes up top for the kill. In his haste to lay waste, however, the moonsaulting Bigelow doesn’t notice Rey move out of the way, leaving the helpless brute to taste nothing but canvas.

As a dazed Bigelow uses the ropes to upright himself, Rey earns another one of his monikers – Master of the 619 – and dials up a between-the-ropes connection of boot to face. Bam Bam, his nose taking the full impact, staggers and falls backward, while Mysterio soars from up top with a diving splash, winding Bigelow long enough for the pinfall. The Ultimate Underdog prevails! VIEW NEXT MATCH >>