Clash of the Toy-tans: Edge vs. Randy Savage

The WWE Universe would witness a true dream collision if time could bend to permit an encounter between Randy Savage and Edge - the "Madness" matched up with The Master Manipulator.

The "Macho Man" raised the bar in sports-entertainment, specifically in the 1980s while tussling with Hulk Hogan, The Ultimate Warrior and more. Known for his outlandish speeches and costumes, it was with his top rope axe handle smashing and elbow drop crashing that Savage claimed the WWE Title on two separate occasions. 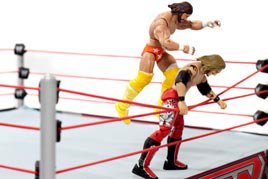 The Rated-R Superstar similarly revolutionized the squared circle with his infamous performances involving ladders (tables and chairs, to boot) and his opportunistic, methodical approach to seizing whatever he desired in WWE - from Lita to the WWE Championship. Always outspoken, Edge's in-ring abilities drove the cunning orator to 11 World Titles and a total of 31 championships of all kinds.

The WWE Universe would be fortunate enough to hear the two, Savage and Edge, exchange verbal barbs, let alone engage in a physical confrontation inside the ring. 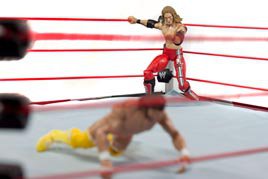 ANALYSIS
In speed, the two are fairly matched, however, the slightly more stably built Savage bears a strength advantage. And though The Rated-R Superstar has been known to take the air on occasion, Macho Man mastered high-flying top rope tactics, the kind that tend to have heavy impact once they've connected. Still, all it would take to ground Savage is a gut-crushing Spear - the move that's claimed its fair share of victories over the likes of John Cena and The Undertaker.

Predictably, The Ultimate Opportunist will employ any and all options in order to win, even if it means a like chicanery. This factor could greatly affect the outcome of this dream bout between two ring legends from different eras. But as proven against the "dirtiest player in the game" (Ric Flair) at WrestleMania VIII and The Million Dollar Man in a 32-man tournament at WrestleMania IV, two-time WWE Champion Savage can endure such underhanded variables in big-time matches. 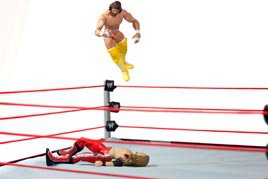 THE VICTOR
The colorful veteran could, "Oh yyyeah," overcome a craftily spun strategy by Edge and rely on his agility to evade the Spear at just the right moment, likely leaving The Ultimate Opportunist downed in the general vicinity of the ring corner. That's when Savage resourcefully takes to the turnbuckles and quickly delivers his signature elbow drop for the three-count and victory.