WWE Bring it Back!: ANY classic WWE Title that’s NOT the Spinner

The WWE Championship has a storied history as diverse as the iconic Superstars that have carried it into battle. Such an incredible symbol of excellence requires a look that will once again reflect the stand-out grapplers who have risen to the top of the WWE mountain.
(WWE TITLE PHOTOS | WWE CHAMPIONS WEIGH IN ON REPLACING WWE TITLE)

WWE.com joins the call of the WWE Universe on Facebook and Twitter, pleading for the WWE to abandon the current “Spinner Title” design and return to the pride and tradition radiated by past WWE Titles.

The WWE Title carried to ring today was created specifically for John Cena, reflecting a time when The Cenation Commander-in-Chief was rapping his way through SmackDown. However, while Cena has long since traded in the giant chain around his neck for dog tags, the Spinner design is still “kicking it old school.” Shouldn’t it have long since gone the direction of other classic personalized titles like Edge’s Rated-R Superstar Spinner modification and “Stone Cold” Steve Austin’s “Smoking Skull” Championship?

If a change is required, there is no shortage of prestigious replacements from which to pick. Looking back through the annals of WWE history, the Winged Eagle Title has to be at the forefront. First introduced for the epic rematch between Hulk Hogan and Andre the Giant on The Main Event in '88, this awe-inspiring prize instantly rose to prominence, walking hand-in-hand with WWE elite from “Macho Man” Randy Savage to Bret “Hit Man” Hart to The Undertaker. 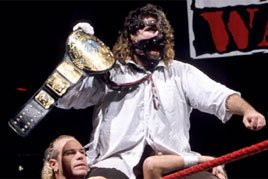 Still, the sheer popularly of the Winged gold does not make it the only brass ring in the sea. Another earth-shattering possibility would be its Attitude Era cousin, featuring a variation of the Eagle, along with a more circular structure similar to the traditional championship, a bigger globe and the larger “Champion” on the bottom.

Not only was the Attitude Era Title carried by greats including The Rock, “Stone Cold” Steve Austin and a slew of other tremendous champions, but bringing back a symbol of WWE’s period of uncontrollable bedlam is truly befitting of the rebellious nature of the current titleholder CM Punk.

Some variation of the WWE Undisputed Championship design might make a comeback. Sporting a classy black and gold layout, this celebrated title made famous by legends like the late Eddie Guerrero screams elite and dignified all at the same time.

Other classic treasures, such as the 1986 Hulk Hogan WWE Title – which he carried into battle for the majority of his legendary first reign in the ’80s – also deserves consideration.

There is enormous glory embedded in past incarnations of WWE’s most coveted prize. So please, stop the collective head of the WWE Universe from spinning and bring back any WWE Title design other than the current title!