Where Are They Now? The Kiss Demon

It should have worked — a blood spewing, fire breathing giant of a professional wrestler inspired and endorsed by the hugely popular rock band Kiss. Yet, The Demon is remembered as a misfire, a major slip-up that finally sealed Eric Bischoff’s fate with World Championship Wrestling and a testament to the over-the-top spending that eventually killed the company. (PHOTOS)

So how did it all go wrong?

"It blows my mind,” Dale Torborg told WWE.com during a phone conversation in early July. “They didn’t capitalize on how much influence Kiss has. They tried to bury [The Demon] to make Eric look bad. That’s the bottom line."

The man who spent three years under the distinctive white and black makeup of the Kiss competitor, Torborg last set foot in a WCW ring a decade ago, yet he’s still passionate about the persona and still irritated by the way things turned out. A lifelong Kiss fan, he put everything he had into The Demon, but the locker room politicking that plagued WCW saw to it that Torborg wallowed in the mid-card for years.

"It could’ve been a lot bigger,” former WCW official Charles Robinson said. “It seemed like it started to get a little momentum and they just stopped with it.”

Dark, brooding and intense, Torborg truly embodied The Demon, but to say it was a role he was born to play would be misleading. In truth, the Florida native was born to play baseball. The son of former Yankees coach Jeff Torborg, Dale grew up on the same crushed red brick infield where greats like Babe Ruth and Mickey Mantle became legends. He pursued a career in the sport himself and did well in the minors, but a fastball to the face took away his depth perception and brought a painful end to his big league dreams. 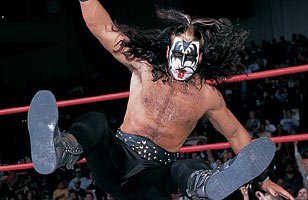 He drifted in the minors after that until a chance meeting with two WWE legends changed the course of his life. While on a flight to Los Angeles, Torborg was seated next to WWE Hall of Famer Hulk Hogan. A friend of Yankees owner George Steinbrenner, The Hulkster talked baseball with Torborg during the trip and introduced him to another baseball-player-turned-wrestler when the plane landed — “Macho Man” Randy Savage.

“That’s the first time I ever met anybody associated with the business,” Torborg revealed. “They were the first ones that said to me, ‘Have you ever thought about wrestling?’ That really sparked it for me.”

Inspired by The Mega Powers, the big man immediately set about pursuing a ring career and began training with former WWE Superstars Jim “The Anvil” Neidhart and The Warlord in a sun-blanched ring behind Neidhart’s home in Land O’Lakes, Fla.

“It was brutal,” Torborg remembered. “The Anvil beat the crap out of me, but I took my lumps.”

He began competing soon after under a persona that was inspired by a baseball-themed street gang from the gritty 1979 film “The Warriors.” Dubbed MVP — short for Most Violent Player — Torborg wore a shredded uniform, painted his face blood red and plied his craft in various independent promotions before grabbing the attention of World Championship Wrestling in 1998. That year, he made his television debut on WCW Thunder, but his arrival was inauspicious at best.

“When it aired, they didn’t use the MVP name,” Torborg said. “They put my real name on the screen and they actually spelled it wrong.” (WATCH)

WCW’s embarrassing miscue was a sign of things to come. After two weeks as MVP, Torborg was approached by WCW executives with an opportunity — the company had recently struck a marketing deal with the rock band Kiss. Hugely popular since the late 1970s, the group had amassed legions of fans with their heavy metal anthems, comic book-inspired costumes and theatrical stage shows. They were a perfect fit for the wild world of sports-entertainment and Torborg would be the man to personify the band in the ring as The Demon.

“I was really pumped,” he admitted. “It was a dream of mine to represent Kiss, which I feel is the greatest band in the world.” 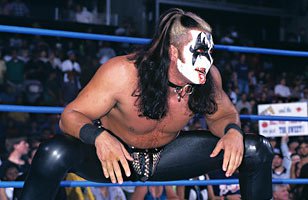 A diehard fan of the group since his youth, the grappler had even written a paper on his admiration for Gene Simmons while in college. He knew the words to all their songs, could mimic Simmons’ stage presence perfectly. Plus, he was 6-foot-7 and 285 pounds. Simply put, he was The Demon.

“There were three of us that got test makeup done,” Torborg revealed. “Eric Bischoff went to L.A. with the test shots and they told me Gene pointed me out and said, ‘This guy looks the most like me.’”

With a great deal of money and hype behind it, The Demon debuted on a live edition of WCW Monday Nitro from Las Vegas that concluded with a performance by Kiss. As the band rocked through a pounding rendition of the heavy metal classic “God of Thunder,” an ornate sarcophagus rose up from the center of the stage and slowly opened, revealing an imposing figure in full Kiss regalia. It was The Demon, but it was not Dale Torborg. Instead, it was Brian Adams — a competitor best known to WWE fans as Crush. The veteran had been moved into the spot at the last minute and Torborg had barely been notified.

“It was heartbreaking,” he admitted.

Still, as much as Torborg was upset, WCW executives were even more distraught. The Kiss performance, which inexplicably aired after the main event, and the ensuing Demon debut ended up being one of the lowest rated segments in the history of Nitro. At a time when the company was locked in a struggle for television viewers with WWE, bad numbers were devastating and someone had to take the blame. Quickly, fingers were pointed at the man who brokered the deal — WCW President Eric Bischoff — and his Kiss Demon concept was immediately tagged as dead on arrival.

It was at this point that Torborg was told he’d be taking over the persona.

“[WCW] called me and said, ‘Are you still interested in doing it? Brian thinks you’re the right pick.’” he remembered. “I said, ‘Absolutely, I want to do it.’”