Where Are They Now? The Kiss Demon, Part Two

Although he was excited for the opportunity, Torborg knew he was stepping into The Demon’s platform boots at a disadvantage. The persona was unjustly labeled a bust before ever competing in a match, but executives were contractually obligated to feature the Kiss creation on television and in pay-per-view events. So he suffered. Terry Funk smashed him in his debut. Vampiro locked him in a coffin and set it on fire. (WATCH) The legendary Sting once beat him in less than a minute. (WATCH) Still, Torborg was happy every time he got in the ring.

“I still enjoyed it,” he admitted. "The whole trip with The Demon was just a crazy ride."

That’s not to say he wasn’t frustrated. The former baseball player knew the persona had a huge built-in fan base and endless potential — in fact, the original plan was to build an entire stable of competitors based on each member of Kiss — but the corporate opinion was that the group had already cashed in on the deal and WCW wasn’t interested in sending them more checks. According to Torborg, the money Kiss made has been overblown, but Gene Simmons was characteristically braggadocios about it in his 2002 autobiography, Kiss and Make-Up.

“It was a win-win situation for us, because Kiss retained all licensing and merchandising rights," the frontman wrote. "WCW did all the work and we reaped all the rewards."

Regardless of what kind of coin was gambled in The Demon deal, there were enough power struggles and half-baked ideas going on at the time to put the company in financial ruin by 2001. With the industry undergoing major changes that year with WWE’s acquisition of WCW and the fall of Extreme Championship Wrestlling, Torborg opted to leave sports-entertainment, albeit temporarily, to pursue an opportunity with Major League Baseball.

“My dad had gotten a Montreal Expos managing job,” Torborg revealed. “He said, ‘I would really like you to come up and work with one of our catchers in order to get him bigger and stronger.’” 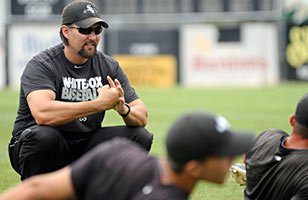 The competitor accepted the offer, but continued performing at independent shows as The Kiss Demon during the offseason. Soon, though, Torborg’s gifts as a coach became apparent to other ball clubs and he was on his way to Florida to work in training for the Marlins. After a World Series season with the team, he joined the Chicago White Sox as a strength and conditioning coordinator. (PHOTOS)

“I’m loving every minute of it,” Torborg said. “They’re an unbelievable organization.”

In his current position, the career athlete spends much of his time working with the different Minor League teams in the White Sox farm system while also assisting the Major League squad. A respected member of the club, Torborg is constantly asked for advice about diet and exercise, but questions about his involvement in sports-entertainment are just as common.

“A bunch of the guys are big WWE fans,” Torborg revealed. “Our catcher, A.J. Pierzynski, wears a Miz shirt under his uniform and Adam Dunn is a huge “Stone Cold” fan. We actually said that when we win the World Series this year, we want him to go to WWE and use his version of the Stone Cold Stunner, which is the ‘Stone Cold Dunner.’”

Off the field, Torborg has been married to his former WCW valet, Asya, since 2000. The couple welcomed their first child in 2005.

“She is the coolest kid,” Torborg said of his five-year-old daughter. “She knows how to lockup, suplex, clothesline. She’ll dropkick me with both feet to the face. She knows all that stuff, so watch out.”

Whether or not his offspring will enter the squared circle is uncertain, but Torborg himself still enjoys stepping through the ropes. Active on the independent scene, he occasionally competes as The Kiss Demon and regularly appears at conventions and charity events.

“It’s funny, over 10 years have passed since WCW and I’m actually getting more requests for appearances and wrestling as The Demon than I ever have before,” Torborg said. “It’s almost like people are ready. They want to see it again.”

Refreshingly positive, Torborg is by no means bitter about the hardships he endured during his time in WCW. In fact, he is grateful that he had the opportunity to compete on a major stage and represent Kiss in front of millions of fans.

“I had a chance to bail on The Demon character and I wouldn’t,” Torborg revealed. “I took a major beating making that decision, because a lot of the diehard fans didn’t like that Gene Simmons would market into their beloved sport. I’ve been destroyed and I don’t really care to be honest with you. No matter what anyone says, I’m super proud that I was The Demon.”