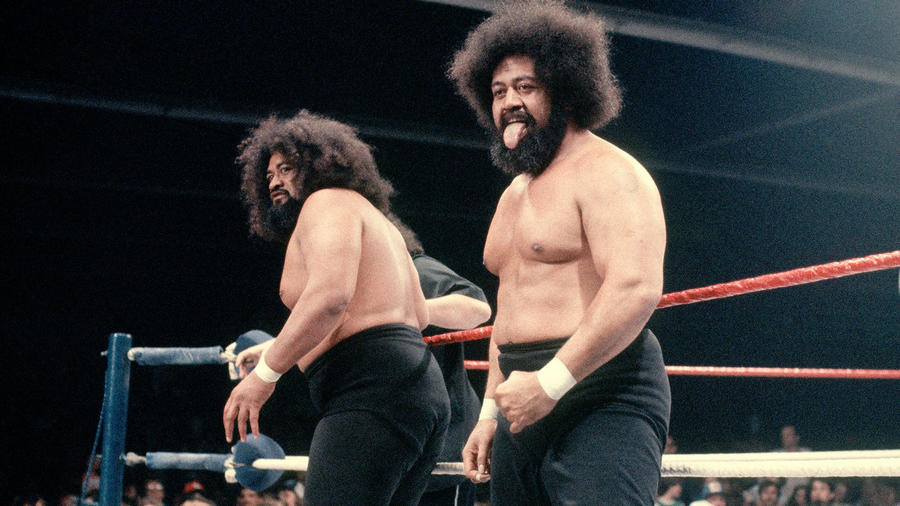 The world of wrestling is deep seeded with tradition. There are many second- and third-generation wrestlers who have made marks in the business, but there is one family that has produced more champions than any -- The Anoa'i family. What began with High Chief Peter Maivia was passed on to nephews Afa & Sika, who took WWE by storm in the late ‘70s and early ‘80s.

Arthur "Afa" Anoa'i began his career being trained by his Uncle Peter Maivia and cousin Rocky Johnson after he left the United States Marine Corps. Afa would then train his brother, Leati "Sika" Anoa'i, and the two would form a tag team. They began their careers in Stampede Wrestling before they debuted in WWE in 1979.

The Wild Samoans joined with manager Captain Lou Albano as they ascended the tag division. Afa & Sika were two men of very few words, but of many quirks. They grunted, picked their noses, they ate raw fish and they … starred in movies? Yes, Afa & Sika were cast in the 1987 cult-classic Body Slam, which also starred The Tonga Kid (Afa's nephew), as well as WWE Hall of Famer Roddy Piper. Most importantly, though, they won championships.

Afa & Sika claimed their first World Tag Team Championship in April 1980, holding the titles for nearly four months. Their second run would last two months, while their third and final title reign would be the longest at just over eight months. They battled the likes of Tony Garea & Rick Martel, Bob Backlund & Pedro Morales, The Strongbows and even cousin Rocky Johnson. It was the team of Johnson & Tony Atlas that ended the third title reign of The Wild Samoans.

When The Wild Samoans split, Sika sought out the managerial services of Mr. Fuji and even took part in the WrestleMania IV Battle Royal. Afa was not seen in WWE until returning in 1992 to manage The Headshrinkers, a team with ties to The Wild Samoans, both professionally and by blood. Samu is Afa's son, and partner Rikishi Fatu is nephew to both Afa & Sika. Under the leadership of Afa, The Headshrinkers terrorized WWE competition and captured the World Tag Team Championship on one occasion.

The Wild Samoans' impact in the ring as performers was immense, and they have continued to have a huge impact on the world of wrestling since their in-ring escapades ended. They no longer have the unorthodox behavior that made them so dangerous in the ‘70s, but they have over 30 years of wrestling knowledge to share with their students at The Wild Samoan Training Center.

Afa & Sika have trained many of the Superstars WWE fans have come to know over the years, including former WWE Champion Yokozuna and former WWE Superstars Rikishi, Tonga Kid, Virgil, Michael P.S. Hayes and Billy Kidman. Afa & Sika are also credited with training Snitsky, as well as multiple-time World Champion Batista and most recently, Sika's son Roman Reigns. All-in-all, between in-ring action, managerial services and their training, the Wild Samoans have won or produced winners of over 50 championships. The ferocious style that Afa & Sika displayed in the ring can be seen through the competitors that have passed through the Wild Samoan Training Center.