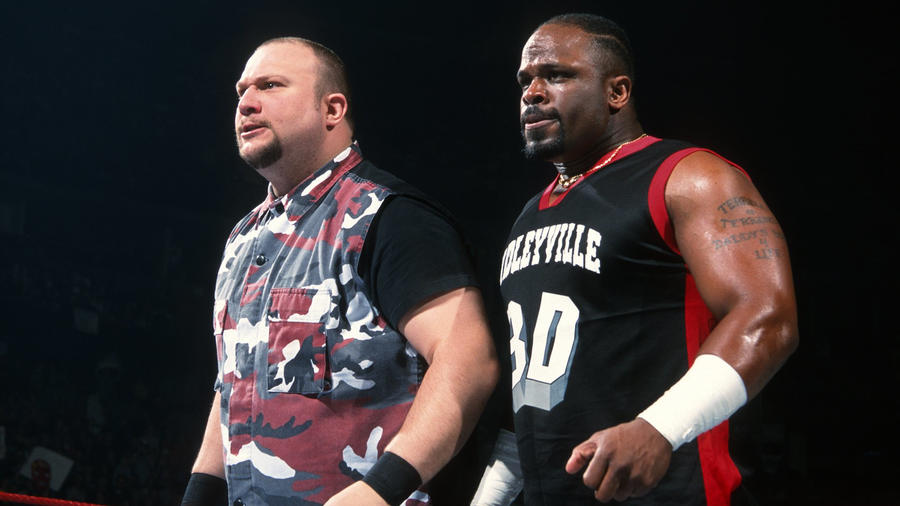 The Dudley Boyz were never supposed to be the most successful tag team of all time, let alone WWE Hall of Famers. When a family of bumbling, bespectacled Dudleys debuted in ECW during summer 1995, they were a goofy alternative to the Philadelphia-based organization’s more hardcore fare. But in November of that year, the Dudley clan gained a bruiser in Bubba Ray.

Bubba began teaming with his good-natured relatives, including Chubby Dudley, Snot Dudley, Dances with Dudley and Dudley, but in 1996, a new brother known as D-Von actively displayed his disapproval with these dorkier Dudleys. D-Von rid ECW of the goofballs and united with Bubba Ray to form an unstoppable force that would last for over 20 years. In spring 1997, The Dudley Boyz unseated The Eliminators to win their first of a record eight ECW Tag Team Championships.

Over the following two-and-a-half years, the brothers employed their signature move, the 3D, to devastate rivals like The Gangstas, Tommy Dreamer & The Sandman, and their little brother, Spike Dudley. But D-Von and Bubba Ray weren’t satisfied with just winning matches. The tie-dye clad thugs incited riots by spewing a brand of vitriolic hostility never before seen in a wrestling ring.

In late 1999, Bubba and D-Von said “WHASSAAP?!” to WWE, where they instantly targeted top tandems like The New Age Outlaws and The Acolytes. Initially bringing villainy to WWE, those damn Dudleys eventually became fan favorites thanks to their unique table-smashing antics. But it was their rivalry with two other tag teams — The Hardy Boyz and Edge & Christian — that catapulted The Dudley Boyz to superstardom. The three risk-taking duos competed in a trilogy of genre-defining Ladder Matches that set the standard not only for that stipulation, but also for tag bouts in general.

After WWE acquired WCW in 2001, an influx of new talent didn’t stop the Dudleys from winning. They captured eight World Tag Team Championships — one more than Edge & Christian — plus one reign as WWE Tag Team Champions when they became the first team to hold both of WWE’s sanctioned tag titles.

In October 2001, Bubba and D-Von captured the WCW Tag Team Championship to become the first and only team to win the tag titles of all three major organizations. At Survivor Series of that year, The Alliance was defeated, but The Dudley Boyz stood tall. In a brutal Steel Cage Match against longtime rivals The Hardy Boyz, Bubba and D-Von unified the WCW and World Tag Team Championships and are recognized as the final WCW Tag Team Champions. Over their illustrious careers, The Dudley Boyz have been tag team champions 18 times.

At Royal Rumble 2015, Bubba Ray Dudley made his WWE return and first appearance in the Royal Rumble Match, but he was eliminated by Bray Wyatt. Later that year, both Bubba Ray and D-Von made their official return to Raw, laying waste to WWE Tag Team Champions The New Day and introducing a new generation of Superstars to their brand of hardcore punishment. In recognition of their two decades of dominance in the tag team ranks, The Dudley Boyz were inducted into the WWE Hall of Fame in 2018.

The Dudley Boyz wrestled in nearly every major organization and dominated each one. Whether fans embrace their antics or despise their vile malice, the Dudleys win no matter where they go.