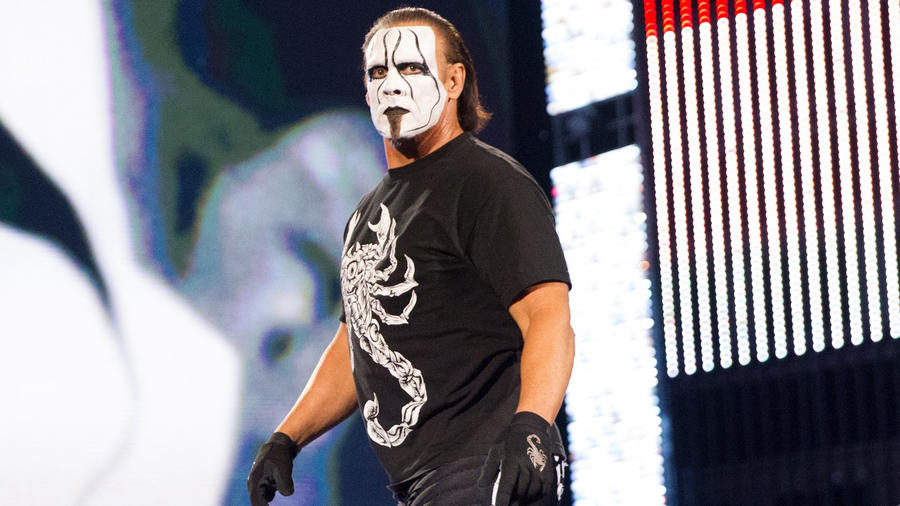 Often dubbed “The Franchise of WCW,” the man called Sting is one of the most recognizable and unique faces in sports-entertainment history. It was that distinction that made him the backbone of the Atlanta-based organization throughout the late 1980s until the end of WCW in 2001.

Beginning with his NWA debut in 1987, Sting brought an enormous amount of charisma to the ring with his bleach blond hair, colorful face paint and neon ring gear. However, at the inaugural Clash of the Champions, a 45-minute time limit draw against NWA World Champion Ric Flair proved The Stinger was on his way to becoming one of sports-entertainment’s elite. Eventually, Sting defeated Flair for the NWA Title, and would later add six WCW World Titles, three WCW Tag Team Championships, two WCW International World Titles and two United States Championships to his resume throughout his career.

While the charismatic competitor was wildly popular with WCW fans, it was a shocking transformation in 1996 that made Sting even more memorable. With The New World Order imposing their will over WCW, The Stinger adopted a darker personality with white and black face paint and attire. He became a silent warrior who lurked in the rafters of arenas all over the country, ready to strike The nWo at a moment’s notice. For more than a year, Sting never spoke or competed in the ring, captivating audiences until finally he squared off with and defeated WCW Champion and nWo leader, “Hollywood” Hulk Hogan.

Sting escalated his efforts against The nWo by joining longtime friend Lex Luger as part of The nWo Wolfpac, changing his white visage to red. However, when The nWo began to disband for good, Sting retained his dark look but adopted an attitude more in line with his flashy "surfer" days.

As WCW’s days became numbered, Sting remained loyal to the organization, engaging in memorable rivalries with Bret “Hit Man” Hart and Vampiro. Fittingly, Sting and Ric Flair squared off in the final match on the last episode of WCW Monday Nitro.

Remembered for his colorful charisma and struggle with The nWo, Sting has become synonymous with the Atlanta-based organization. Although he had never competed in a WWE ring more than a decade since the demise of WCW, he remained one of the most popular and respected competitors of all-time.

At Survivor Series 2014, The Authority was pulling out all the stops to prevent Dolph Ziggler from defeating Seth Rollins in the Traditional Survivor Series Elimination Tag Team Match. When it appeared that Rollins would secure the victory for Team Authority and ensure they remain in power, Sting appeared for the first time in a WWE ring and confronted Triple H.

Following a tense staredown, The Game attacked The Stinger, who countered by executing his patented Scorpion Death Drop. Sting then pulled Ziggler on top of Rollins, giving Team Cena the win and dethroning The Authority.

As 2014 ended, John Cena was forced to bring The Authority back to power. One of their first orders of business was to fire Dolph Ziggler, Erick Rowan and Ryback for aiding Cena at Survivor Series. One week before the Royal Rumble pay-per-view, Cena battled Kane, Seth Rollins and Big Show in a 3-on-1 Handicap Match in an effort to save his allies' jobs. Although the odds were stacked against the Cenation leader, Sting returned again – making his WWE Raw debut – distracting Rollins and allowing Cena to capture a pinfall victory.

Fed up with Sting's interference, Triple H called out The Stinger for a face-to-face confrontation at WWE Fastlane. Using mind games of his own to frighten The Cerebral Assassin with a number of doppelgangers, WCW's face-painted franchise accepted The Game's offer.

At WWE Fastlane, Triple H attacked Sting, but The Vigilante evened the odds with his legendary baseball bat. Pointing to the WrestleMania sign hanging above the ring, Sting challenged The Game to a battle on The Grandest Stage of Them All.

Sting made a surprise appearance on the March 16 edition of Raw, coming to the aid of Randy Orton and standing tall with The Viper over The Authority's forces. The Vigilante made his presence felt, sending a message to Triple H before their epic confrontation at WrestleMania 31. The following week, The Icon kicked off Monday Night Raw for the first time ever only to be interrupted by both Stephanie McMahon and Triple H, coming face-to-face with his WrestleMania opponent just six days before their clash on The Grandest Stage of Them All.

Setting foot inside a WWE ring to compete for the first time at WrestleMania 31, Sting nearly defeated Triple H on several occasions. However, when he locked in his patented Scorpion Death Lock, The Game's DX cronies made their way to the ring to try to take out The Stinger. Surviving the initial onslaught, Sting nearly met Triple H's sledgehammer before The nWo made their way to the ring to take out DX. As the chaos between the WWE and WCW factions erupted, Sting regained control of the match. However, Triple H managed to get his sledgehammer and knock Sting out before The Vigilante could capitalize on a second Stinger Splash. Although The Game and WWE stood victorious in the final battle against WCW, WWE's COO showed his respect by shaking Sting's hand after the match.

It would be Triple H's protege, Seth Rollins, who would next face off against the face-painted legend at Night of Champions. The two would battle for the WWE World Heavyweight Championship with Rollins squeaking by with a roll-up on The Stinger.

Though The Stinger often likes to say "the only thing sure about Sting is that nothing is for sure," there is one thing nobody can deny - that Sting has had a Hall of Fame-worthy career. That will be confirmed on the eve of WrestleMania 32, when he joins the WWE Hall of Fame as a member of the Class of 2016.