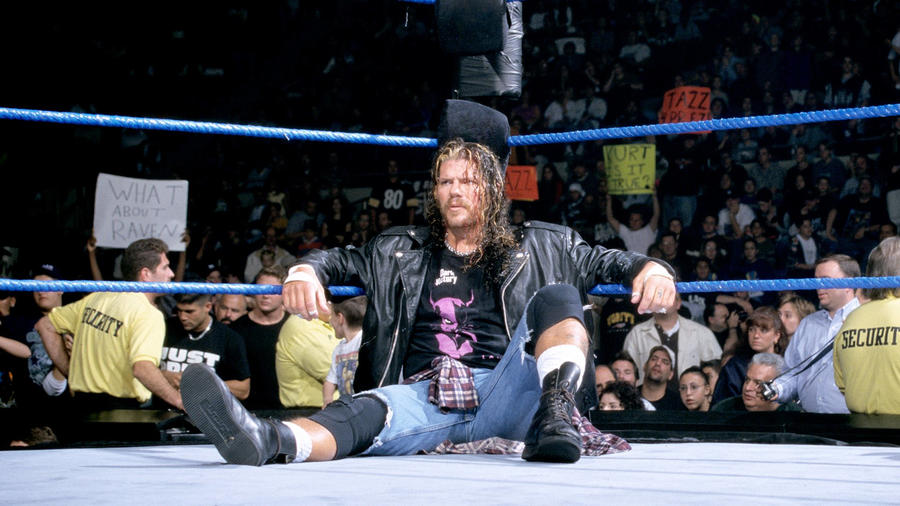 Few antagonists in the history of sports-entertainment have stirred as much controversy in the squared circle as the man from The Bowery called Raven. The grungy sociopath terrorized opponents and fans alike in major wrestling organizations, including WWE, WCW and the original incarnation of ECW.

Raven may have looked like a roadie for Pearl Jam, but he had the brains to become one of the ring’s most influential leaders. With an IQ of more than 140, the gutter punk became a member of Mensa and used his intellect to recruit a cult of followers when Stevie Richards brought him to ECW in 1995. Surrounded by converts like Richards, Blue Meanie, The Pitbulls and Cactus Jack, the sadistic messiah became a villainous idol in Philadelphia by employing a mesmerizing blend of an indomitable demeanor and glib prose. His signature signoff became Edgar Allen Poe’s elegant line, “Quoth the Raven, ‘Nevermore.’”

The master manipulator first targeted his former summer camp rival Tommy Dreamer, who had been a popular jock while Raven was a social outcast. “For three years, I’d never beat him,” Dreamer said of the man who once broke his fingers in the ring. “Every time I’d come so close, I’d somehow not pull it off.” It wasn’t until two years of battles later that Dreamer finally defeated his longtime rival at Wrestlepalooza 1997, Raven's final night in his first ECW tenure.

The Sandman, whom Raven twice defeated for the ECW World Championship, became the deranged mastermind’s most emotionally affected victim. In 1996, Raven became involved with The Sandman’s ex-wife and brainwashed The Hardcore Icon’s own 7-year-old son Tyler, who adopted Raven’s wardrobe, mannerisms and phrases and told him, “I love you more than my own daddy.” At one event, the charismatic miscreant assaulted The Sandman in such an offensive manner that Kurt Angle, who was in attendance, stormed out of the ECW Arena in disgust. Raven was later forced to publicly apologize for the brutalization.

After arriving in WCW, Raven recruited competitors like Perry Saturn and Billy Kidman to join his sect, now called The Flock. He defeated Diamond Dallas Page for the United States Championship and competed in memorable matches against Goldberg and Chris Jericho before returning to his Extreme roots. Raven’s second tenure in ECW was brief, as he signed with WWE in 2000, where he became a record 26-time Hardcore Champion by defeating Superstars like Big Show and Bradshaw before parting ways with WWE in January 2003.

“I loved Raven,” Paul Heyman once proclaimed. “Raven motivated me. He inspired me. He could do anything, embrace it and had a passion for it — the likes of which I’d never seen before and may never see again.”