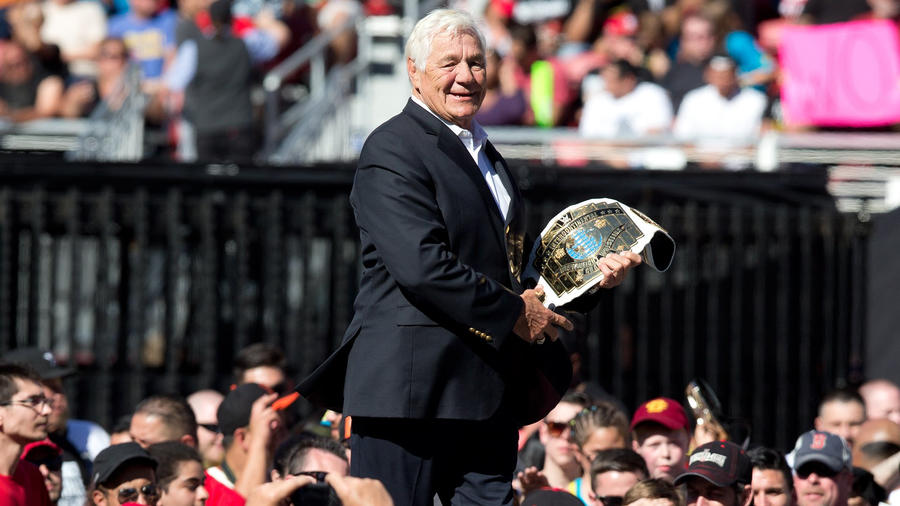 Whether in the ring, on the microphone or behind the scenes, Pat Patterson was one of sports-entertainment's most successful and well-known Superstars for five decades. In addition, Patterson was linked to many "firsts" in the industry, as his voice and his mind helped him continue his career well after his in-ring days were over.

Patterson began his career in 1958 in his native Montreal before moving on to the San Francisco promotion. Patterson was a fixture in the Bay Area for nearly two decades, winning the regional tag team championship an unprecedented 10 times with seven different partners and twice capturing the legendary Cow Palace Battle Royal in 1975 and 1981.

It was in San Francisco where he first met and teamed with Ray Stevens, and the pair moved on to the AWA in the late 1970s. They won the AWA World Tag Team Championship in 1978, but after losing the gold a year later, Patterson moved on to WWE.

He made an impact almost immediately after falling under the tutelage of The Grand Wizard. In September 1979, Patterson won a tournament in Rio de Janeiro to become the first Intercontinental Champion. He held the gold until 1980 when he split with The Wizard and became a fan favorite.

In 1981, Patterson's rivalry with Sgt. Slaughter became one of the biggest in WWE. The two brutalized each other every chance they got in a series of Boot Camp Matches, with their rivalry culminating in a brutal Alley Fight at Madison Square Garden that April.

During that time, Patterson also began his career as a color commentator, teaming up with Vince McMahon to announce WWE Championship Wrestling. Patterson continued to do double-duty in the ring and behind the mic until his official retirement in 1984.

That didn't stop him from contributing to WWE, however. He took a role as a WWE Official, and became one of McMahon's close confidantes. In 1988, one of Patterson's greatest ideas came to life in the form of the Royal Rumble Match; while it has been modified and expanded since its debut, the Royal Rumble Match format itself is an idea credited to Patterson.

A decade later, his close relationship with McMahon would bring Patterson back to WWE television; Alongside Gerald Brisco, Patterson served as one of McMahon's advisors (or "stooges," as our fans might call them). Patterson and Brisco did a lot of dirty work for the WWE Chairman in the late 1990s, and Patterson would become part of more history during that time.

In June 2000, Patterson became the oldest man to ever win the Hardcore Championship. Over 20 years after making history with the Intercontinental Championship, Patterson pinned Crash Holly to claim Hardcore gold. At King of the Ring that year, Patterson met Brisco in an infamous Hardcore Evening Gown Match; unfortunately for Patterson, Holly took advantage of the "24/7 Rule" to join the match and regain the gold, ending Pat's reign after only a week. Patterson would soon go back to being a faithful McMahon ally, remaining with WWE in an official backstage capacity for another five years.

For all his efforts, Pat Patterson was inducted into the Hall of Fame in 1996 by Bret Hart, another one of Canada's finest sports-entertainers. In his 25-plus years in WWE, Patterson was synonymous with making history. From the Intercontinental Title to the Royal Rumble Match and beyond, his name will forever be revered in WWE lore.