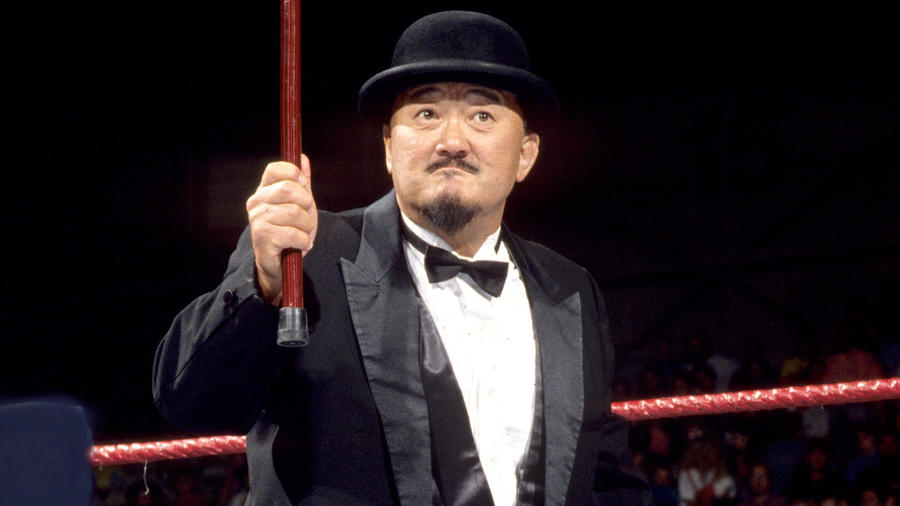 Mr. Fuji has been called many things: tough, physical, Fuj the Stooge, Manager of Champions and most importantly, WWE Hall of Famer.

There are few names in the world of sports-entertainment that are synonymous with success, but Mr. Fuji is one of those names. During his in-ring days, Fuji established himself as one of the great rule-breakers in WWE. Known for keeping bags of salt well-hidden in his trunks, the talented Fuji made himself that much more dangerous by employing this secret weapon.

Alongside partner Professor Toru Tanaka, Mr. Fuji was a World Tag Team Champion three times, as he and Tanaka reigned supreme in the tag division in the early ‘70s. On one occasion, Fuji & Tanaka held the titles for nearly a year, and they possessed the gold for almost six months during their second run as champions. After his partnership with Tanaka ended, Mr. Fuji would partner with Mr. Saito and capture the World Tag Team Championship two more times.

Mr. Fuji was considered one of the toughest competitors throughout his career within the ring, and when he made the transition to managing other wrestlers, his toughness was seen in those he represented.

Fuji himself had been managed by three of the greatest WWE managers during his career — The Grand Wizard, Classy Freddie Blassie and Captain Lou Albano — yet he looked to make his own mark in WWE. After moving from in-ring action to the outside, Fuji turned to another Hall of Famer to begin his managerial career — George "The Animal" Steele. The two had different ideals, however, and Fuji would move on to more "magnificent" pastures.

Signing Don Muraco as his next client was magic for Mr. Fuji, as the popularity of the two men skyrocketed, even if it was a love-to-hate relationship with WWE fans. During this partnership, WWE fans were treated to the classic Fuji Vice, Fuji General, Fuji Bandito and Fuji Chan videos with Fuji and Muraco spoofing successful shows as they tried to break into Hollywood stardom. For a brief time, Kamala, Sika and Killer Khan would also be managed by Mr. Fuji.

It was his success as a tag team wrestler that brought Mr. Fuji back full circle as a manager to the tag ranks. He first tried his hand with Muraco & Cowboy Bob Orton, who would team together at WrestleMania III in a losing effort. It was then that Fuji took control of the contracts of Demolition. At WrestleMania IV, Ax & Smash would defeat Strike Force to win the World Tag Team Championships.

Demolition would hold the titles for a record 478 days, before losing to The Brain Busters. After turning on Demolition and aligning with The Powers of Pain, Fuji became known to WWE fans as "Fuj the Stooge." Breaking the rules seemed to suit Mr. Fuji as a manager, and who can forget his amazing "victory" at WrestleMania V in the 5K marathon on the boardwalk in Atlantic City?

Not long after, Fuji managed The Orient Express and The Berserker before he landed his biggest success, literally and figuratively, with Yokozuna. He would lead Yokozuna to victory at the 1993 Royal Rumble, guaranteeing Yokozuna would face Bret Hart at WrestleMania IX for the WWE Championship. Mr. Fuji interfered in the match at WrestleMania IX, throwing his trademark salt into the eyes of Hart, allowing Yokozuna to win the WWE Championship. Moments later, an ecstatic Fuji, with years of revenge on his mind, would brazenly challenge Hulk Hogan to enter the ring and fight "my Yokozuma." He called Hogan a "yellow belly," to which Hulkster responded by winning the title. Fuji later managed Yokozuna to another title run, as well as a World Tag Team Championship with Owen Hart.

Mr. Fuji slowly faded out of the spotlight and retired from the squared circle, but not before making one last appearance at WrestleMania XII to accompany Yokozuna to the ring. A decade later, on the eve of WrestleMania 23, it was longtime charge Muraco who put Fuji into the pantheon of the elite when he inducted his former manager into the WWE Hall of Fame.

His career will be remembered by different generations for different reasons, but one constant will be an indelible mark — Mr. Fuji, whether as a wrestler or manager, is one of the most successful performers ever to set foot in a WWE ring.