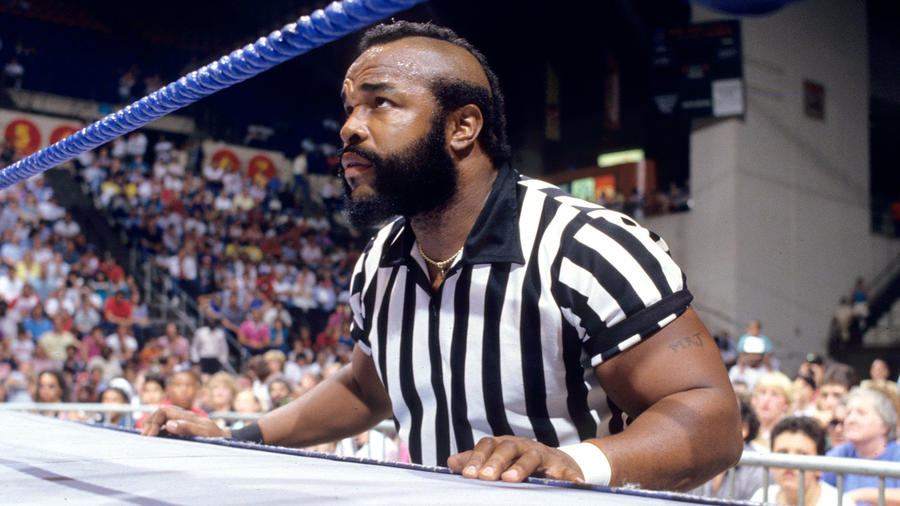 Few men in history have bridged the gap between the world of professional wrestling and pop culture quite like Mr. T. Pitying fools from the South Side of Chicago all the way to Madison Square Garden, the man born Laurence Tureaud anchored the very first WrestleMania in 1985 and helped create some of the most iconic moments from Hulkamania’s early days.

First gaining national attention after winning an NBC competition called “America’s Toughest Bouncer,” Mr. T — with a shawl of gold jewelry around his neck and an unmistakable Mohawk — was recruited by Sylvester Stallone to play the villainous Clubber Lang in “Rocky III.” As the film’s larger-than-life antagonist, he uttered one of the most famous lines in movie history: “I don’t hate Balboa, but I pity the fool.”

Mr. T’s turn as Clubber Lang led to a breakout role as B.A. Baracus on the NBC action series “The A-Team.” It was there that T went from a star to a bona fide 1980s icon with his own Saturday morning cartoon and breakfast cereal. While starring on one of television’s biggest hits, the gold-covered brawler joined up with his “Rocky III” co-star Hulk Hogan in WWE in 1985.

With “The Rock ‘n’ Wrestling Connection” in full swing, Mr. T appeared on the groundbreaking The War to Settle the Score on MTV. In a melee following Hogan’s battle against Roddy Piper, T hopped into the ring and backed The Hulkster in a standoff with Piper and Paul Orndorff. In the weeks that followed, the pair made major television appearances on “The Morning Show” with Regis Philbin and “Saturday Night Live” alongside Billy Crystal before defeating Piper and Orndorff in the historic main event of the very first WrestleMania.

The following year, T rekindled his rivalry with Hot Rod and defeated Piper in a Boxing Match in one of WrestleMania 2’s three main events. In 1987, T was named WWE’s new Special Enforcer, a position that allowed him to mind the antics of The Honky Tonk Man and Bobby Heenan.

When Hogan debuted for WCW in 1994, Mr. T joined his longtime friend. He was the referee for many of The Immortal One’s big matches, including a title defense in a steel cage at Halloween Havoc. He even defeated noted brawler Kevin Sullivan at Starrcade. After decades of influencing sports-entertainment, Mr. T took his rightful place in the WWE Hall of Fame as one of the men who helped bring WWE from a regional wrestling company into a pop culture powerhouse.