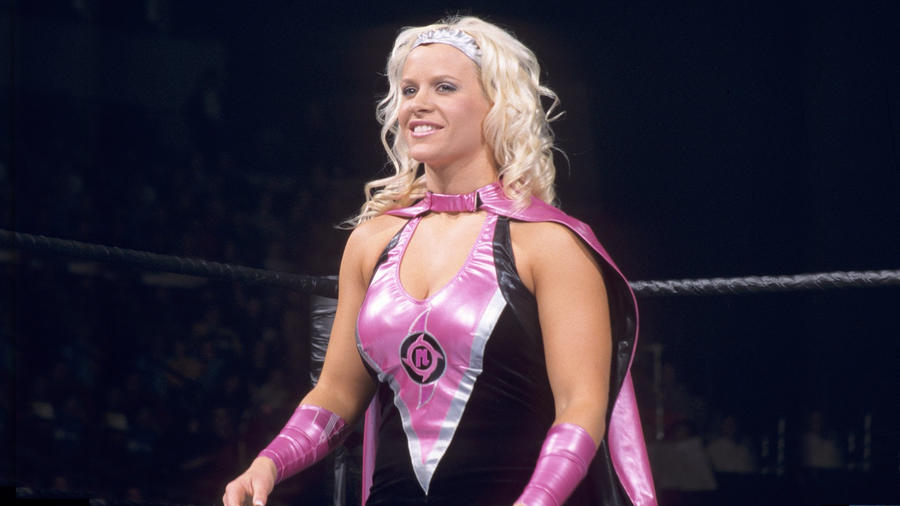 Though she is best remembered for getting her head shaved at WrestleMania XX, there was a lot more to former WWE Women's Champion Molly Holly than that very public haircut.

Trained by the "Man of 1,000 Holds," Dean Malenko, Molly debuted in 1997 but first garnered national attention in 2000 as Miss Madness, one of Randy "Macho Man" Savage's valets in WCW. But after her run in WCW ended, Nora Greenwald was reborn in WWE as Molly Holly, the cousin of the late Crash Holly and Hardcore Holly, and she became a star.

Molly would help Crash and Hardcore in battles against Test & Albert (who were then managed by Trish Stratus, who was just beginning her career in WWE) and against the Dudley Boyz. After a brief relationship with Spike Dudley, Molly aligned herself with The Hurricane (known today as Gregory Helms), adopting the moniker "Mighty Molly." The duo entertained our fans as WWE's resident superheroes, with Molly acting as Hurricane's trusty, yet beautiful, sidekick.

But Mighty Molly would grow tired of being in Hurricane's shadow and yearn for gold and her own identity. This became evident when she outsmarted him and was one of several Superstars who won -- and lost -- the Hardcore Championship in a whirlwind series of bouts at WrestleMania X8. Soon afterward, Molly retired her superhero persona, stopped dyeing her hair blond and showed the world that she was a no-nonsense, yet uptight, Superstar. She defeated Trish Status for her first Women's Championship at the 2002 King of the Ring.

During her two championship reigns between 2002 and early 2004, Molly took on all comers, from Stratus to Lita to Gail Kim and finally Victoria, who ended her last title run. Victoria was responsible for the most embarrassing moment in Molly's career when she defeated her in a Hair vs. Title Match at WrestleMania XX. It was unheard of for a Diva to participate in a Hair vs. Title Match, especially on the grandest stage of them all. Fans howled and Molly shrieked when Victoria shaved a restrained Molly bald. A mortified Molly walked around WWE for months trying to hide her shaven chrome with various wigs.

Molly was never quite the same after her humiliation at WrestleMania. She failed to regain the Women's Championship during several opportunities and lost a series of matches to the less experienced -- and less skilled -- Stacy Kiebler. Molly left WWE and her full-time in-ring career in April 2005.

Since her departure, Molly has made occasional appearances on pro wrestling's independent circuit. But she has devoted much of her time to doing missionary work for her church. Molly has spent several months studying Spanish in Guatemala, where she had a chance to be reunited with old friends when WWE passed through during its tour of Latin America in March. When asked whether she would return to sports-entertainment, Molly said, "Right now, I have no plans to return to wrestling, but you never say never in this business."

So, Nora Greenwald has found a new passion and calling beyond the walls of WWE. Even if she never returns to a WWE ring, our fans will always admire Molly Holly for her abilities and her guts.