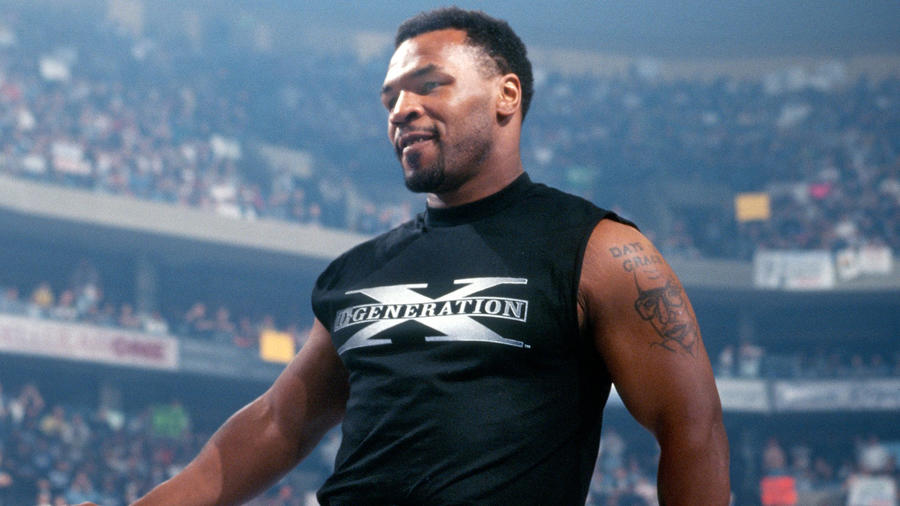 Mike Tyson’s name is synonymous with ferocity inside the ring.

From Larry Holmes to “Stone Cold” Steve Austin, from Michael Spinks to Shawn Michaels, “The Baddest Man on the Planet” has faced down the best in both boxing and sports-entertainment. And thanks to his role as an enforcer during the WWE Title Match at WrestleMania XIV, Mike Tyson is not only a pop-culture icon, but an important part of WWE history.

One of boxing’s greatest and most intimidating champions, "Iron Mike" exploded onto the scene in the mid-1980s, dispatching opponents in record time — and in terrifying fashion. In his first professional fight in 1985, the 18-year-old laid the groundwork for what would become a path of destruction, as he flattened his opponent in the first round. Known for his lightning-fast hands and uncanny defensive abilities, the knockout artist would go on to win his first 22 fights — all but one via KO.

At only 20 years old, Tyson became the youngest heavyweight champion in the sport's history when he defeated Trevor Berbick in 1986. From there, “Iron Mike’s” standing as a powerful and destructive puncher was so widespread that opponents were actually scared to face him. This intimidating presence helped Tyson become one of the world’s richest and most famous athletes.

After living up to his moniker as “The Baddest Man on the Planet” in the boxing ring, Tyson helped WrestleMania XIV live up to its billing as “The Greatest Extravaganza of All Time.” Serving as the special enforcer in the massive showdown between WWE Champion Shawn Michaels and “Stone Cold” Steve Austin, Tyson caused a media circus to surround The Show of Shows in 1998.

First welcomed into WWE by Mr. McMahon, “Iron Mike’s” introduction was interrupted by The Texas Rattlesnake, resulting in a wild brawl between the two tough guys. Weeks later, Tyson aligned himself with HBK and D-Generation X. WWE fans who thought this association would sway the brawler’s involvement at WrestleMania XIV were shocked when Tyson ended up being the one who counted the pin to give Austin his first WWE Title. After the bout, the heavy-hitter knocked an angry Michaels out cold in front of a rabid Boston crowd.

Following his scene-stealing turn in the blockbuster comedy, “The Hangover,” Tyson returned to WWE in 2010 as the guest host of Raw where the former fighter clearly reveled being back in the ring. In his first-ever match, Tyson teamed with Chris Jericho to battle Triple H & HBK. Before the match was over, Tyson revealed his true allegiance to DX before silencing his mouthy opponent with a trademark right hand.

A lifelong WWE enthusiast, Mike Tyson’s contributions to WWE are legendary, and he’s earned his place next to the greatest performers of all time in the celebrity wing of the WWE Hall of Fame.