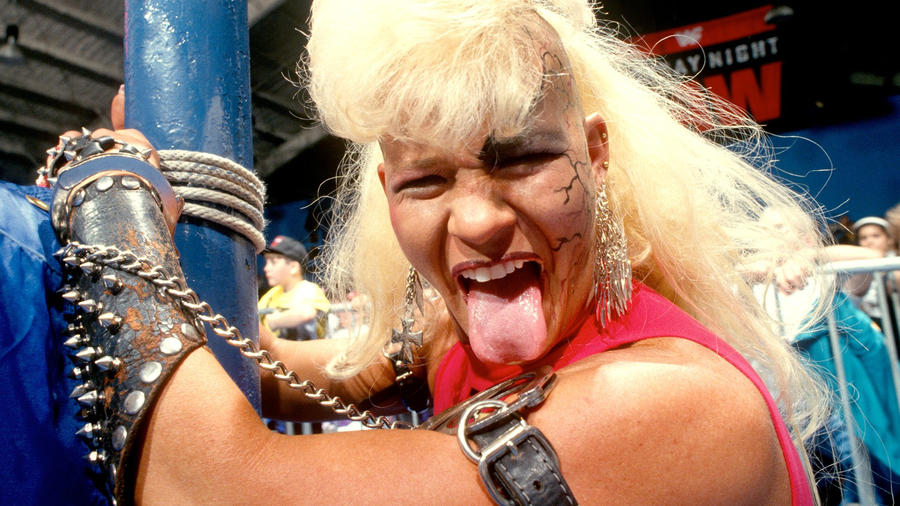 Sports-entertainment is filled with second and even third-generation Superstars, but it's very rare that females are part of multiple generations -- unless, of course, your family name is Vachon.

Luna Vachon is one of the few females to follow in her father's footsteps and climb into the squared circle. But the daughter of famed Canadian grappler Paul "Butcher" Vachon didn't just have role models in her own home; they're all over her family. Her uncle, Maurice "Mad Dog" Vachon, was a five-time AWA World Champion, and aunt Vivian Vachon was one of the most successful female Superstars of the 1970s.

As a youngster, Luna would often climb into the ring with her father, aunt or uncle before or after their matches. After making it clear that she wouldn't be dissuaded of a career in the ring, Luna officially trained under Vivian and The Fabulous Moolah in the mid-1980s and made her professional debut in 1986. Competing in Championship Wrestling from Florida as a member of Kevin Sullivan's clan, she struck fear into her opponents based on her physical presence alone: A half-shaven mane of blond hair, freaky face paint and a sneer that never seemed to leave her face.

After leaving Florida, Luna spent time as a competitor and a manager in various independents and Puerto Rico. In 1993, she finally came to WWE for the first time, replacing Hall of Famer "Sensational" Sherri as Shawn Michaels' manager. She later moved on to managing Bam Bam Bigelow, eventually falling in love with the "Beast from the East" and becoming his "main squeeze." The duo warred with Doink the Clown and his pint-size prankster sidekick, Dink, for months, leading to a match where Bam Bam & Luna defeated Doink & Dink at WrestleMania X.

Later in 1994, Luna sold Bam Bam's contract to Ted DiBiase and concentrated on winning the revived Women's Championship. While she was unable to win the title from then-champion Alundra Blayze before leaving WWE late in 1994, her hand-picked henchwoman -- Japanese Superstar Bull Nakano -- eventually did claim the gold.

Short stints in both ECW and WCW followed before Luna returned to WWE in 1997 to stand by the side of The Artist Formerly Known as Goldust. Luna quickly developed a rivalry with Sable, leading to another WrestleMania Mixed Tag Team Match. This time, however, Luna & Goldust were defeated by Sable & Marc Mero. The following year, however, the two Divas would patch up their differences, and for the first time, Luna heard the cheers of our fans.

Paired with Sable and The Oddities -- a collection of Superstars who were all slightly bizarre in some way -- Luna became quite popular. It wouldn't last, however, as Luna would later attack Sable and rekindle their rivalry. Throughout 1999, she continued to chase the Women's Championship and also managed Gangrel before leaving WWE for good in early-2000. Thereafter, she had been semi-retired, occasionally returning to the ring from time to time for various independent promotions.

Even though she never captured the Women's Championship, Luna was one of the most feared and respected competitors of the 1990s. At a time when the word "Diva" was being redefined in WWE, Luna Vachon was one of those who used her talents and unique look to help rewrite the lexicon.