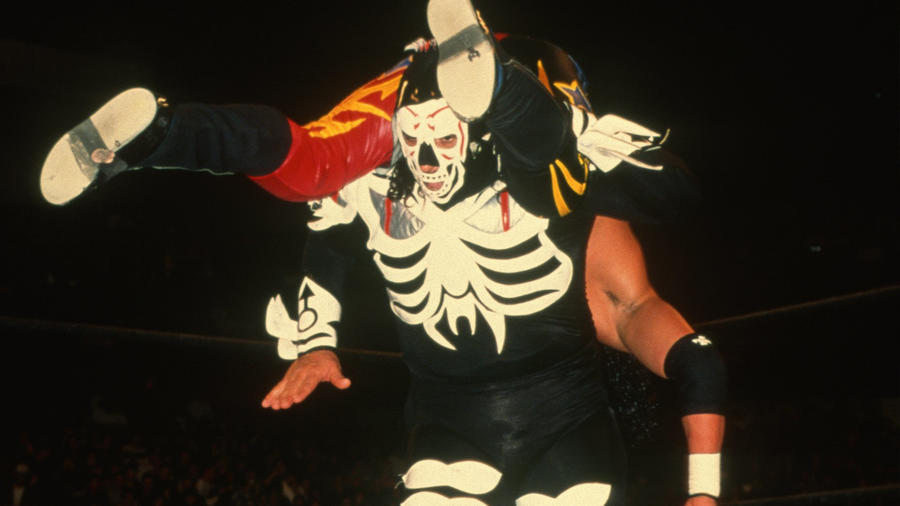 One of the more popular Mexican competitors to make his way to WCW, La Parka didn’t earn the nickname “The Chairman of WCW” for his business acumen. No, the luchador in the skeleton outfit picked up that moniker due to his propensity for bashing his opponents with a steel chair, much to the delight of fans.

Inspired by the imagery of Mexico’s Day of the Dead celebrations, La Parka first appeared in the AAA promotion in Mexico in 1992. His skeleton-like outfit and unusual charisma made him a quick fan favorite, despite his villainous actions in the ring.

He caught the eyes of WCW officials when he took part in the groundbreaking “When Worlds Collide” pay-per-view in 1994, which led to him making his debut in the Atlanta-based promotion in 1996. Competing in the Cruiserweight division, La Parka often stood out because he was much taller and stockier than his lightning-fast opposition.

La Parka certainly knew how to slow them down, though. Shortly after joining WCW, La Parka discovered the advantages a steel chair presented him. The Mexican star embraced the chair, never keeping it far from his reach. He clutched it close as he made his way to the ring, stopping to bust out an air guitar riff on the weapon before dishing out punishment.

It didn’t matter if you were friend or foe, anyone who crossed La Parka’s path ended up tasting cold steel. In fact, at Souled Out 1998, following an Eight-Man Tag Team Match, “The Chairman” clobbered all four of his opponents, then took out his own team before breaking out into a dance routine on the chair.

In 1999, WCW got to hear a little something from the normally silent luchador, or so it seemed. La Parka would grab the microphone and stand atop his chair to address the crowd, as a voice that didn’t seem to fit him declared that “Skull Captain’s in the hizzouse!” After informing fans that he had two chair shots ready to go, one for him and one for his homies, La Parka’s “voice” would dish out a few insults toward his challenger. The luchador would toss the microphone away as if it were possessed before begging his opponents not to beat him. The old “that wasn’t my voice” routine didn’t work on guys like Meng and Finlay, so “The Skull Captain” often found himself on the receiving end of a great deal of punishment.

After the voiceover incidents, La Parka left WCW, heading back to his native Mexico, where he still competes to this day. As always, his opponents remain wary that “The Chairman’s” favorite weapon is just inches away from dealing out damage.