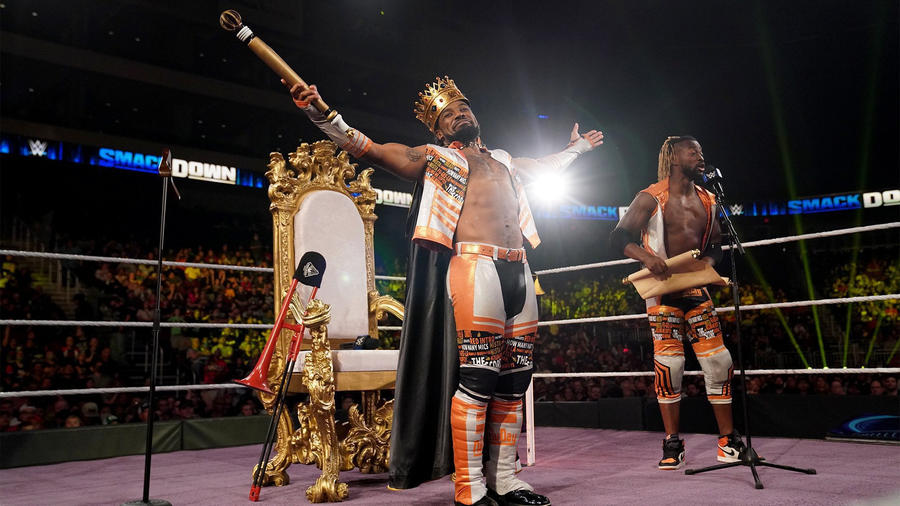 It’s a New Day, yes it is! And, without a doubt, King Woods is a huge part of it.

A dynamic Superstar with plenty of brains — he's currently earning his Ph.D. in educational psychology in addition to his two bachelor's degrees in psychology and philosophy and a master's in psychology — Woods is far more intelligent than his off-key trombone bleating may let on. He's damn good in the ring, too, snatching multiple WWE Tag Team Championships alongside his New Day crew of Big E and Kofi Kingston.

Legit pop-culture phenoms, The New Day proved their place in sports-entertainment history by setting the record for the longest Tag Team Championship reign in WWE history. They also released their own Booty-O’s cereal, hosted WrestleMania and brought some much-needed magic and wonder back to WWE.

In between earning degrees and titles, Woods has also found the time to host his own YouTube gaming channel, UpUpDownDown, which has more than two million subscribers. No doubt, Woods and his New Day cohorts have seized their moment, and when Xavier Woods steps inside the ring, you can be sure that his opponents are about to be schooled.

The 2020 WWE Draft was a bittersweet occasion for The New Day, however, as Woods and Kingston captured the SmackDown Tag Team Titles, but they were immediately drafted to Raw, and SmackDown responded by selecting Big E. History essentially repeated itself in the 2021 WWE Draft, as Kofi and Xavier were selected by SmackDown, but Big E was chosen by the red brand.

At WWE Crown Jewel, Woods made history when he overcame Finn Balor to become the 2021 King of the Ring Tournament winner! All hail King Woods!