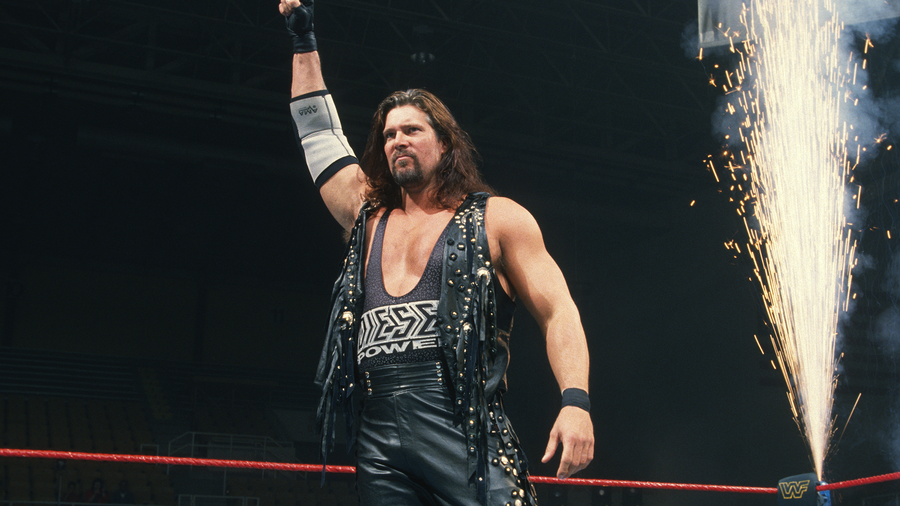 As Kevin Nash lifted one of his mighty legs over the ropes, you immediately knew what was to follow. And no, we're not talking about that other leg.

It was time for trouble.

Whether he's known as Diesel, one of "The Outsiders" or simply Big Kev, this imposing Superstar has never been afraid to make waves at every stop. He's got the list of enemies to prove it.

Nash learned early that being nearly 7-foot and more than 300 pounds doesn't automatically punch your ticket to the top. Although he was blessed with remarkable size and athletic ability, his career had inauspicious beginnings. First appearing in WCW in 1990, Nash competed under a kaleidoscope of personas as he struggled to showcase his full potential as a sports-entertainer.

Things would take a sharp turn for the better in 1993. Debuting as a sunglassed ringside enforcer in WWE, Nash quickly made an impact by taking on the role of Shawn Michaels' personal – and cold-blooded – bodyguard. Within his first year, Diesel eliminated seven men in the 1994 Royal Rumble Match and later won the Intercontinental Championship. Shortly thereafter, Diesel and Michaels captured the World Tag Team Titles together, making "Big Daddy Cool" a double champion in WWE.

With Diesel's star on a meteoric rise, it became obvious that he had greater ambition than just being Michaels' protector. After the duo's relationship frayed, Diesel defeated the legendary Bob Backlund in eight seconds to win the WWE Championship. The transformation from sidekick to juggernaut was complete.

Big Daddy Cool would go on to hold the title for nearly a year, smashing challengers like Michaels, Sycho Sid and Mabel during his lengthy reign. After finally losing the championship to Bret Hart at Survivor Series 1995, Diesel battled foes like The Undertaker before making a move that forever changed the sports-entertainment landscape.

In the spring of 1996, Nash and Scott Hall left WWE and invaded World Championship Wrestling. Soon joining forces with Hulk Hogan, they became known as The New World Order, one of the biggest must-see attractions in history. Defiant, arrogant and dangerous, the rebel group completely dominated WCW and soon had fans tuning into Monday Nitro by the millions. Titles such as the WCW Tag Team Championship turned into nWo trophies as The Outsiders of Nash and Hall flattened many smaller opponents.

Eventually, though, the massive egos of Nash and Hogan clashed, leading Nash to form an nWo splinter group known as The Wolfpac. Including top dogs such as former World Champions "Macho Man" Randy Savage, Lex Luger and Sting, the powerful faction helped propel Nash to the very top of WCW as a singles competitor. At the end of 1998, Nash pulled off the unthinkable by felling the undefeated Goldberg at Starrcade, capturing the WCW World Heavyweight Championship and breaking the titan's legendary winning streak. He would acquire the coveted title a total of five times before WCW folded in 2001.

The vaunted trio of Nash, Hall and Hogan made their return to WWE at No Way Out in 2002, but the reunion wasn't "just too sweet." The nWo butted heads with the likes of "Stone Cold" Steve Austin and The Rock before the group disbanded and a series of injuries put Nash on the shelf for several months. Upon his return, Nash had one last shot at the World Heavyweight Championship during a rivalry with Triple H. However, "Big Sexy" failed to rise above The Game and disappeared from WWE again soon after.

More than seven years later, the WWE Universe saw Nash step over the ropes again in a stunning comeback. Sporting his classic Diesel look, the towering Superstar entered the 2011 Royal Rumble Match at No. 32 to a loud ovation from the crowd. Disruptive as ever, Nash controversially attacked CM Punk at SummerSlam and made life a living hell for WWE's new COO, Triple H.

While Triple H got the last laugh by brutalizing Nash in a Sledgehammer Ladder Match at WWE TLC 2011, the cunning big man showed once more why he's one of the most menacing WWE performers of all time and more than deserving of a spot in the WWE Hall of Fame.

After all, you don't become a six-time World Champion without smashing a few toes along the way.