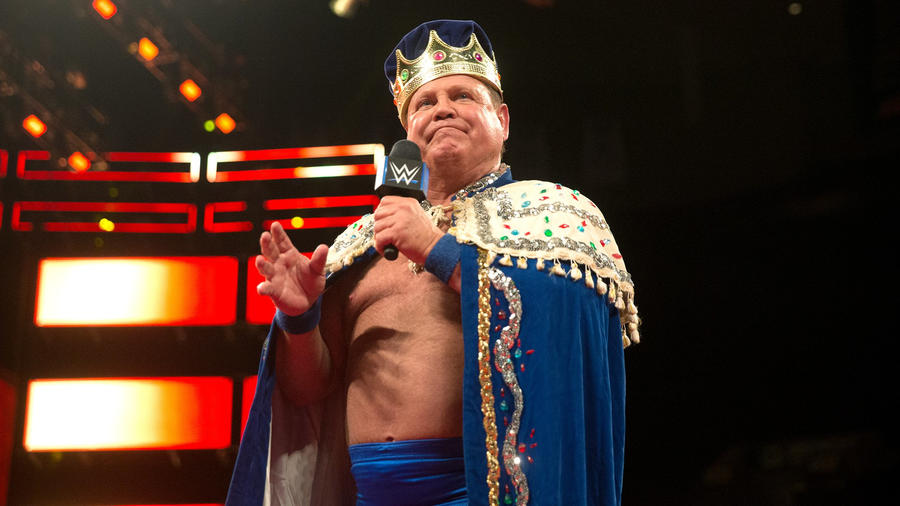 It’s good to be the king. Just ask Jerry Lawler.

Reigning over sports-entertainment since the 1970s, Jerry “The King” Lawler has thrilled in the ring as the pride of Memphis, Tenn. and entertained from the announce table as Raw’s most irrepressible broadcaster. Effective as both a hero and villain, The King enraged WWE fans when he offended Bret Hart’s parents during a personal rivalry with The Hit Man, and then inspired them when he stepped in the ring to challenge The Miz for the WWE Title at 61 years of age. This aptitude for every aspect of sports-entertainment has earned Lawler countless titles, legions of fans and entry into the WWE Hall of Fame.

First making his name in Memphis, Tenn., Lawler gained national attention for his rivalry with comedian Andy Kaufman. Claiming to be the "Inter-Gender Wrestling Champion of the World,” Kaufman made the mistake of insulting The King in front of his hometown crowd in the Mid-South Coliseum in 1982. Lawler responded by blasting the “Taxi” actor with two piledrivers, which led to an incendiary showdown on “Late Night with David Letterman.” During a tense interview on the nationally televised program, Kaufman once again offended The King, leading Lawler to slap the comic right out of his chair in front of a shocked studio audience. Fifteen years later, the WWE Hall of Famer recreated this legendary TV moment with Jim Carrey on the set of the Andy Kaufman biopic, “Man on the Moon.”

After dispatching Kaufman, The King ruled over promotions like Minnesota’s AWA and Tennessee’s USWA before finally arriving in WWE in 1992. Caustic from the get-go, Lawler used his sharp wit to rile up rivals like Bret “Hit Man” Hart and Doink the Clown before taking a seat at the announce booth to commentate alongside Jim Ross. Together, the duo formed one of sports-entertainment’s most entertaining broadcast teams, as they deftly called the action of WWE’s booming “Attitude Era.”

Lawler’s voice has remained a staple of WWE programming ever since, but that hasn’t stopped him from getting in the ring. Often noted as one of the greatest Superstars to never hold the WWE Championship, The King nearly beat The Miz for the coveted title at Elimination Chamber in 2011 and took on his sniveling broadcast partner, Michael Cole, at WrestleMania XXVII. Competing in his fifth decade as a wrestler, Lawler proved that his piledriver — just like his wit — was still as devastating as ever. Hail to the King, baby.