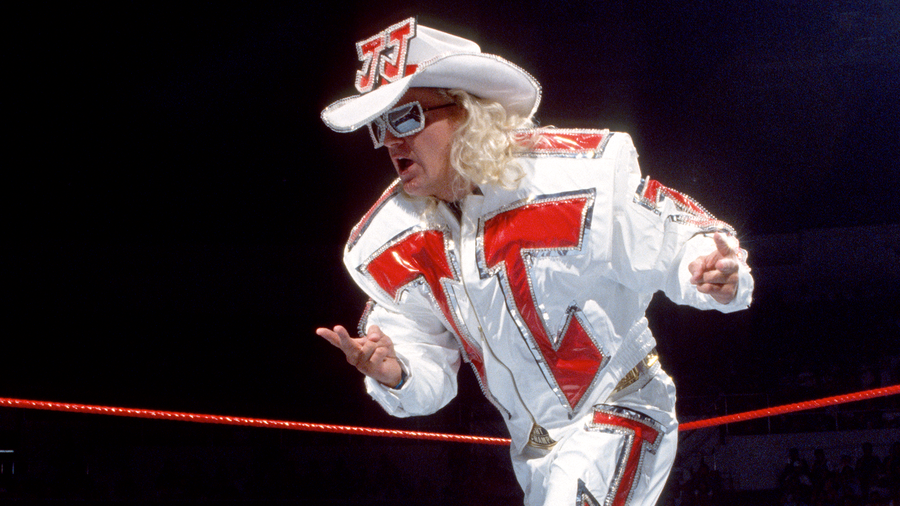 If you think Jeff Jarrett expected to hear anything other than an affirmative every time he fired that question at the WWE Universe, then you didn’t understand the character of the Fargo strutting, Technicolor dreamcoated country crooner from Music City, USA.

That grinning arrogance — matched with a predilection for smashing guys over the head with a guitar — made Jarrett a career villain in both WWE and WCW. He was a successful one, too, with four reigns as WCW World Heavyweight Champion and six as WWE Intercontinental Champion with the bulk of his runs coming during a particularly excellent stretch for that title.

The son of Nashville wrestling promoter Jerry Jarrett, Double J began his career as a referee, but soon enjoyed the benefits that the spawns of ring power players have always been handed. But Jarrett — unlike, say, Erik Watts — had a skillset that allowed him to succeed beyond his father’s safety net.

Introduced to WWE audiences in 1993 as an obnoxious country singer, Double J draped himself in garish light-up clothing and capped off all his interviews by spelling out his full name and asking, “Ain’t I great?” His shtick could be grating, but his success was undeniable as he wrestled the Intercontinental Title away from Razor Ramon on more than one occasion.

Jarrett’s musician act unraveled when it was revealed that The Roadie (who would later gain his own fame as Road Dogg) had performed the vocals on Double J’s “hit” song “With My Baby Tonight.” The humiliation sent Jarrett running to WCW where he would act as both a Four Horseman and a Four Horseman turncoat during a year with the company.

Jarrett’s reinvention as a tough, Southern villain during WWE’s “Attitude Era” has largely been forgotten — although a partnership with Owen Hart was as entertaining as it was successful — but he had a run of luck with the persona in WCW. Reintroduced to the organization as "The Chosen One," Jarrett blasted so many guys with guitars even The Honky Tonk Man had to be like, “Dude, ease up.” Still, he managed to parlay his Pete Townsend impression into a spot as one of the top villains of the company’s post-boom period.

Double J didn’t make it back to WWE after the 2001 buyout of WCW — in fact, he was publicly fired by Mr. McMahon on the final Raw before WrestleMania X-Seven — but he continues to play an influential role in sports-entertainment as both a promoter and a persona to this day. For the indelible mark he made on sports-entertainment, Jeff Jarrett will be inducted into the WWE Hall of Fame as part of the Class of 2018. Ain’t that great?