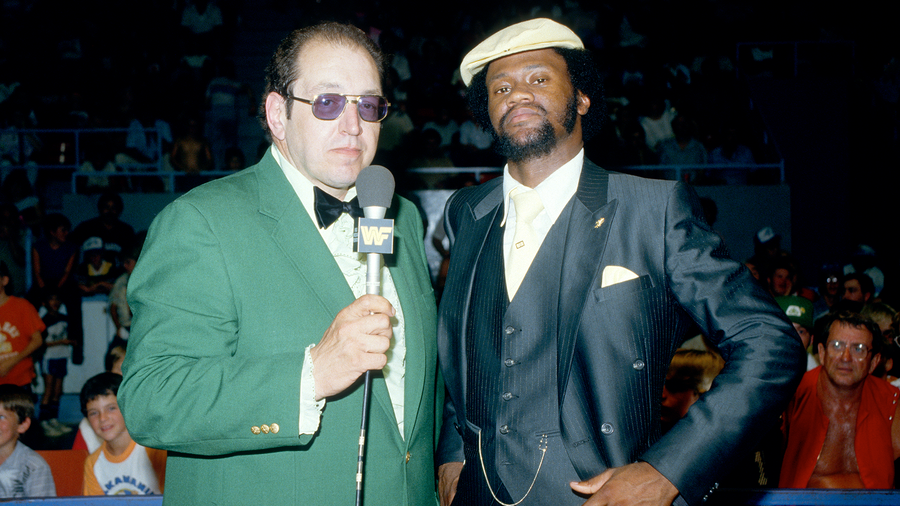 That's just one of the legendary catchphrases uttered by Gorilla Monsoon during his years as a WWE broadcaster. While the generation of WWE fans growing up in the 1980s and 1990s may only remember Monsoon as a broadcaster, an earlier generation remembers him as one of the most feared competitors in sports-entertainment.

As a youth, Robert Marella was a standout athlete, lettering in three sports in high school. He continued on to Ithaca College, where he became one of the most accomplished wrestlers in the school's history; so accomplished, in fact, that he was inducted into his alma mater's Athletic Hall of Fame in 1979.

Following his college graduation in 1959, Marella began wrestling in New York as Gino Marella; shortly after, however, he re-debuted for northeast promoters Vincent J. McMahon and Joseph "Toots" Mondt as Gorilla Monsoon, a "former Asiatic Champion" billed as hailing from Manchuria. With manager "Wild" Red Berry at his side to do all the talking, Monsoon was instantly one of the most hated Superstars in the country. He used his immense size to his advantage and looked the part of a savage, decimating his opponents with his Manchurian Splash and famed Airplane Spin.

When WWE broke away from the NWA in 1963, Monsoon became one of the cornerstones of the new promotion. In November of that year, Monsoon teamed with fellow Hall of Famer Killer Kowalski to win the United States Tag Team Championship, a title he would hold once again a few years later with "Cowboy" Bill Watts.

Later that same month, however, he stepped into the ring with then-WWE Champion Bruno Sammartino at the old Madison Square Garden in a match that both men would later cite as the toughest of their careers. It went the full 90-minute time limit without a winner decided, and became just the first in a long series of battles between Monsoon and Sammartino over the gold.

In 1969, Gorilla Monsoon was mercilessly attacked on television by The Sheik, a wrestler even more vicious and hated than he. Former arch-rival Sammartino came to his rescue; the two then became friends, leading to Monsoon becoming a huge fan favorite, which he would remain for the rest of his career. The 1970s saw Monsoon go through a complete reversal, as one of the most despised men of the previous decade became one of the most beloved of the next.

The most high-profile incident of his wrestling career occurred in 1976 during a match with Baron Mikel Scicluna in Philadelphia. Boxing's Heavyweight Champion, Muhammad Ali, rushed the ring at the end of the match, dancing and throwing jabs at Monsoon. Gorilla responded by hoisting the champ into an airplane spin and slamming him to the canvas.

A year later, boxing would again come into Monsoon's spotlight, as he met Andre the Giant in a boxing match in Puerto Rico, which was won by Andre. By that time, however, Monsoon's career began to wind down, and in 1980, he lost a Retirement Match to Ken Patera. Gorilla only wrestled a handful of times after that (in special Legends matches), but that was just the beginning of the second phase of his career.

Monsoon had been a partial owner of WWE since its inception; in 1982, he was bought out by Vincent K. McMahon, who was in the process of purchasing WWE from his father. McMahon put Monsoon behind the mic, sparking his legendary broadcasting career by making him the WWE's top play-by-play man. Gorilla worked with many partners on many different television shows and became the voice of pay-per-view when WWE expanded into the new genre in the late 1980s. As a commentator, Monsoon gave birth to a slew of "Gorilla-isms," various phrases that he used repeatedly during his commentary. During this time, Monsoon's son Joey Marella began working as a WWE referee, a duty he would continue until his untimely passing in 1994.

Monsoon and Jesse "The Body" Ventura (his first pay-per-view partner) are considered by many to have been the greatest commentary team in the history of sports-entertainment. Monsoon also formed a winning duo with good friend Bobby "The Brain" Heenan, playing the exasperated straight man to great effect and coining him as "The Weasel." Their run as hosts of Prime Time Wrestling on the USA Network has produced some legendary comedy, and in a fitting end, it was Monsoon who threw "The Brain" out of the Manhattan Center during his final appearance on Raw in 1993.

While still active in 1994, Monsoon was inducted into the WWE Hall of Fame by fellow announcer Jim Ross. That wasn't the end of his career by any means, however; while Ross succeeded him as the lead voice of WWE, Monsoon took on another role in 1995 when he became WWE President. He was a key figure on WWE television while in this role, but as his health began to deteriorate, he began to appear less and less until relinquishing his post in 1997.

After stepping down as president, Monsoon spent the majority of his time backstage as a coordinator; in fact, the producers' area just behind the curtain is known as "Gorilla" in his honor. His last public appearance came at WrestleMania XV in Philadelphia on March 28, 1999, where he acted as a judge for the Brawl for All Match. Sadly, on Oct. 4 of that year, Robert Marella passed away at the age of 62.

For 40 years, he entertained audiences and dedicated himself to the business like few others. Whether in the ring, at the mic or behind the scenes, Robert "Gorilla Monsoon" Marella will always be remembered as one of the greatest of all-time; he stands out as a true giant, both in size and reputation.