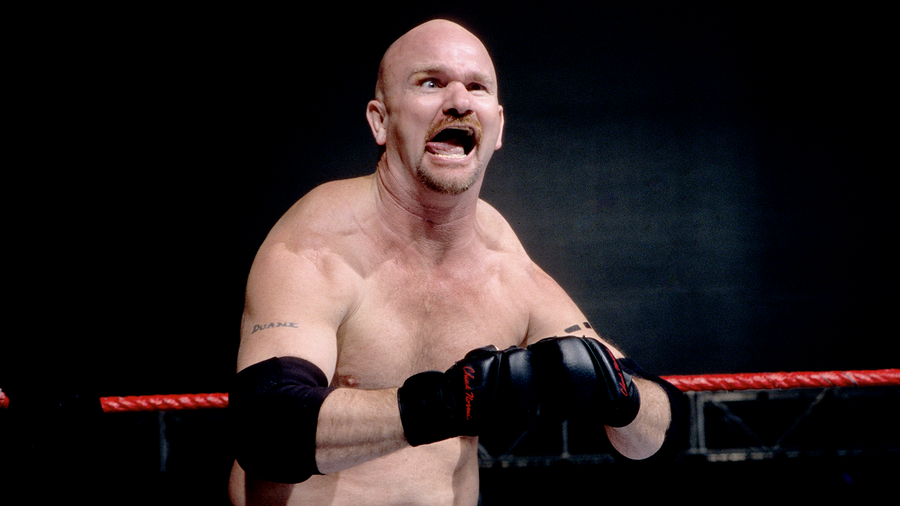 The deliberate drumming in his trademark entrance music was unmistakable. The sparkling pyro was unbelievable. The crowd chanting his name in unison in anticipation of his arrival was undeniable.

Then, reality would set in. The hero was, indeed, bald, and he wore black tights. And he had the same mannerisms and growl of a certain former WCW World Champion. But his neck was … let's just say less-than-massive and had more of a "pencil-neck geek" aura. The biceps — if you could call them that — didn't really cause Hulk Hogan sleepless nights. As the smoke cleared — and our hero choked on the fumes — it became painfully (yet amusingly) apparent that sometimes imitation, depending on whom you talk to, can be the finest form of flattery.

And that's how Duane Gill, better known as Gillberg, will be remembered by WWE fans and the object of his impression, Goldberg. Gillberg was WWE's playful poke at Goldberg during the height of the Monday Night War with WCW. Arguably, Gillberg personified the ruthlessness and aggression of the Attitude Era as much as "Stone Cold" Steve Austin — no one was exempt from parody and the gloves were decidedly off in the battle for Monday night supremacy.

Before his breakthrough as Gillberg, Gill was most familiar to our fans as a shaggy-haired performer with limited abilities and skill who bravely entered the ring with any and all comers. Gill rarely had success, but he kept getting up and coming back for more. As Gillberg, he had more notoriety and even managed to snag championship gold, shocking Christian and the world when he won the Light Heavyweight Championship in November 1998. Though his win-loss record was more Brooklyn Brawler than Goldberg, Gillberg holds a record in the WWE history books — he's the longest-reigning WWE Light Heavyweight Champion ever!

Gillberg returned to WWE briefly in 2003, actually just long enough to get manhandled by WWE's newest signee, Goldberg. The light-hearted light heavyweight returned to WWE one last time on the 15th Anniversary of Monday Night Raw in 2007 to compete in a battle royal. In true Gillberg fashion, he was the first man eliminated.

Gillberg made an additional appearance in 2017 during Chris Jericho's "Festival of Friendship" and was subsequently demolished by Kevin Owens.