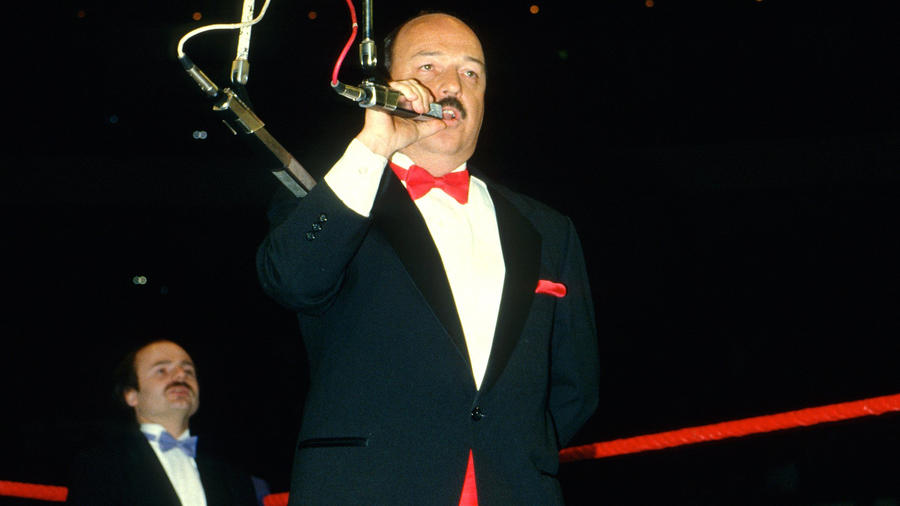 Following more than 30 years in sports-entertainment, Gene Okerlund became one of, if not the most recognizable announcers in the history of the squared circle. Nicknamed "Mean Gene" by longtime colleague and fellow Minnesotan Jesse Ventura, Okerlund began as a backstage interviewer in the Minneapolis-based AWA in the early 1970s.

In his early days, Mean Gene was often seen interviewing some of the greatest stars in the AWA, including Bobby Heenan and his protégés and Hulk Hogan. In 1984, Mean Gene came to WWE as a locker room interviewer and announcer. Beyond the backstage halls of arenas around the world, his distinct voice bellowed a memorable rendition of the National Anthem at the first WrestleMania in 1985.

During his time in WWE, Gene became the lead locker room interviewer, but the mustached broadcaster also provided ringside commentary and hosted several shows, including All-American Wrestling, Tuesday Night Titans, Wrestling Challenge and Prime Time Wrestling. In the same decade, Gene even stepped into the ring on one unforgettable occasion, teaming with Hulk Hogan to defeat Mr. Fuji and George "The Animal" Steele. He wouldn't cross between the ropes as a competitor again in WWE until April 2012 when he tagged with Sheamus to defeat Alberto Del Rio and Daniel Bryan on a "Blast from the Past" edition of SmackDown.

Gene moved to WCW in 1993, where the iconic backstage correspondent provided access to worldwide viewers in a different Atlanta-based environment until the company was bought by WWE in 2001. He returned to WWE at WrestleMania X-Seven to announce the Gimmick Battle Royal with Bobby "The Brain" Heenan, and he went on to host the behind-the-scenes original program WWE Confidential for its entire existence.

With all that he accomplished in his career, Okerlund's finest achievement came on April 1, 2006, with his induction into the WWE Hall of Fame, a unique personality among ring greats like Bret Hart and Eddie Guerrero.