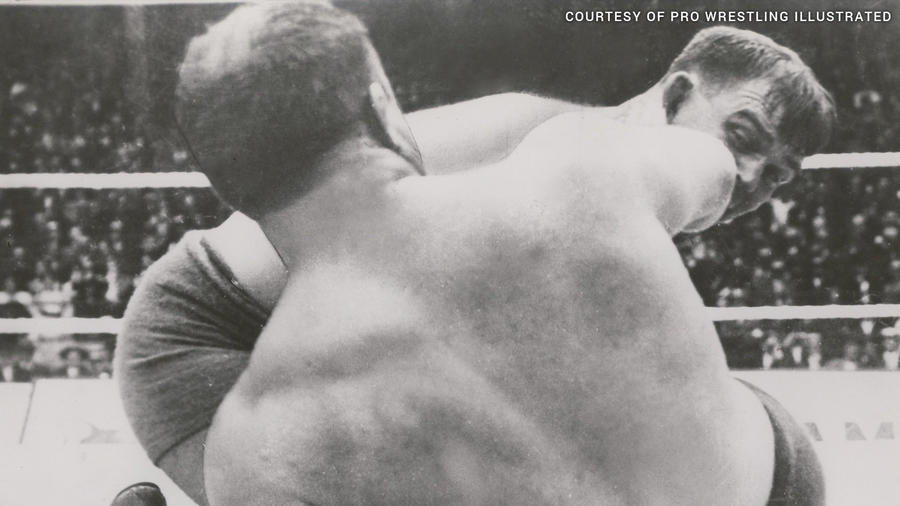 Frank Gotch is a true pioneer in the world of wrestling. The first American professional wrestler to win the World Heavyweight Freestyle Championship, Gotch is credited by historians for popularizing what would come to be known as sports-entertainment in the United States. His reign as World Heavyweight Champion from 1908 until his final match in 1913 remains one of the longest in history to this day.

Only two months after his debut, Gotch competed against reigning American Heavyweight Champion Dan McLeod. Although Gotch was unsuccessful against the champion, it took McLeod nearly two hours to defeat the rookie.

After touring the Yukon and earning the nickname “Champion of The Klondike,” Gotch returned to the United States and defeated Tom Jenkins to become American Heavyweight Champion. Not satisfied with being America’s best, Gotch set his sights on George Hackenschmidt and the Heavyweight Championship of the World.

In 1908 at Dexter Park Pavilion in Chicago, “The Russian Lion” Hackenschmidt was unable to continue in the second fall of their championship match and surrendered the World Heavyweight Championship after being punished for over two hours by Gotch.

Gotch met Hackenschmidt again on September 4, 1911 at the brand new Comiskey Park in Chicago, drawing almost 30,000 fans to witness a historic battle that generated over $87,000 in ticket sales, the equivalent of well over two million dollars today. Gotch won the rematch in under 30 minutes by targeting “The Russian Lion’s” injured right knee and giving him the option of being pinning or having his foot broken. Hackenschmidt chose to be pinned.

The 5-foot-11, 210-pound native of Humboldt, Iowa was one of America’s most popular professional athletes from 1900 until his retirement. Gotch became such a celebrity that he was in demand for public appearances everywhere. Once, while attending a Chicago Cubs baseball game at Wrigley Field, nearly every member of the Cubs team came to his private box and asked for his autograph. He starred in a play called "All About A Bout” that toured internationally. The World Heavyweight Champion was even invited to the White House by President Teddy Roosevelt.

Gotch reigned as World Heavyweight Champion from his first victory over Hackenscmidt in 1908 until he retired in 1913. An eight-foot tall bronze statue of Gotch, atop a three-foot pedestal, stands in his humble hometown of Humboldt, honoring its favorite son. Now, Frank Gotch can add another honor to his legendary resume, as he is one of the WWE Hall of Fame’s first Legacy inductees.