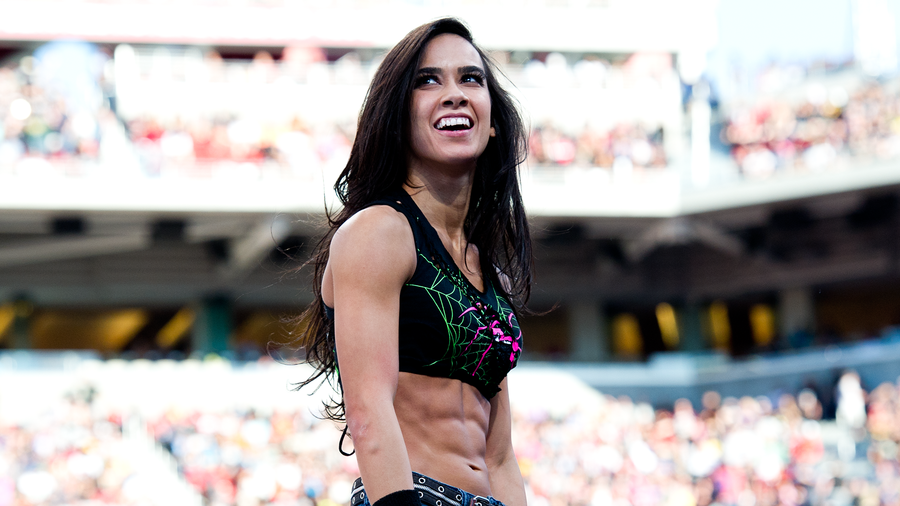 Was AJ Lee the figment of some Manga-geek’s adolescent imagination? She was an avid video gamer, regularly thumbing through comic books and wearing the scuffs on her Chuck Taylors with pride. But don’t be fooled. This unpredictable young woman was not as innocent as she looked.

Although she stood a petite 5-foot-2, AJ was a fierce competitor with an energetic, high-flying style that posed a threat to any Diva. This bold New Jersey native first introduced herself to the WWE Universe on the third season of WWE NXT. She finished in third place but won many WWE fans with her lucha-inspired moveset and indomitable fighting spirit.

A year after debuting on SmackDown in May 2011, AJ was pivotal in the 18-second outcome of the World Heavyweight Championship Match at WrestleMania XXVIII with a kiss to her beau, Daniel Bryan. The couple’s subsequent breakup sent AJ into an emotional tailspin, and she went on to become romantically entangled with WWE’s top Superstars, including CM Punk, Kane and even John Cena.

Following a brief and controversial stint as Raw’s General Manager — a tenure marred by controversy due to her increasingly erratic behavior — AJ found herself in the arms of the brash Dolph Ziggler. Coincidentally enough, it was in the femme fatale’s home state that The Showoff cashed in his Money in the Bank contract on Alberto Del Rio to become the World Heavyweight Champion just one night after WrestleMania 29.

It wasn’t long before AJ claimed a championship of her own. After winning a No. 1 Contender’s Divas Battle Royal on Raw, AJ defeated former friend Kaitlyn to ensnare the Divas Title and would go on to hold that prize for a record-shattering 295 days until she was unseated by NXT Women’s Champion Paige the day after WrestleMania 30. It would be her first of three Divas Championships.

Even though it was impossible to predict what AJ would do next, one thing remained a constant: She always kept us guessing.