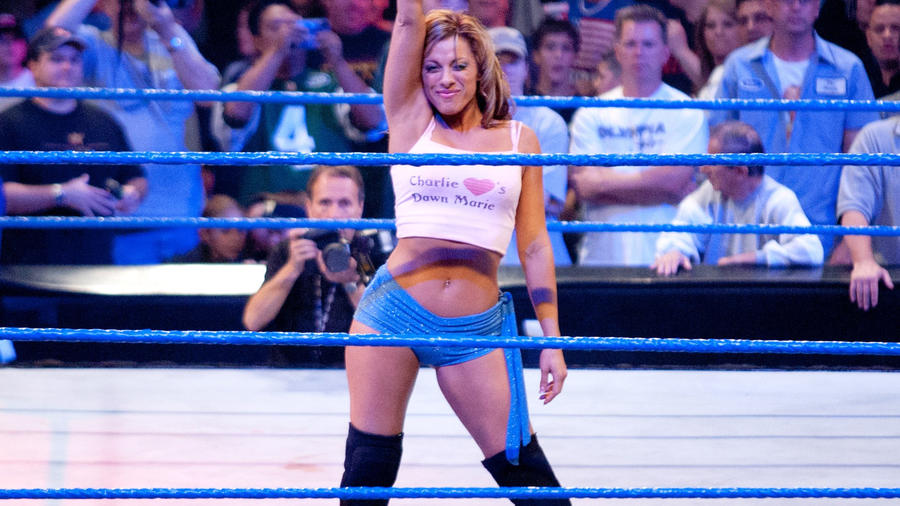 As controversial as she was beautiful, Dawn Marie first caught the attention of fans in 1998 as Lance Storm's ditzy valet in Extreme Championship Wrestling. But despite her airhead persona, the New Jersey native helped Storm and his tag partner, Justin Credible, grab the ECW Tag Team Championships on two occassions before the company folded in 2001.

From there, Dawn Marie was quickly signed to WWE's SmackDown brand where she first appeared as Mr. McMahon's legal assistant. The gorgeous Diva is best remembered, however, for her wildly bizarre relationship with Torrie Wilson's father, Al.

First setting her sights on the blonde beauty's old man as a way to torment her, Dawn Marie soon fell in love with the charmingly clueless Mr. Wilson. This bizarre romance led to one of the strangest moments in SmackDown history in which the two were married in the middle of the ring while wearing nothing but their underwear. Dawn's involvement with her dad drew the Torrie's ire, leading to many matches between the two and a few very memorable bikini contests.

Dawn Marie would continue to butt heads with Wilson before turning her attention to Miss Jackie in 2004. As she did with Torrie, Dawn Marie got invovled in Jackie's personal life, claiming she had an affair with the beauty's fiancee, Charlie Haas. The two women settled their differences at Armageddon with Dawn coming out on top.

In 2005, Dawn Marie reunited with Lance Storm at ECW One Night Stand and helped him score a victory over Chris Jericho, but would leave WWE soon after. While backstage catfights between the Divas calmed down after Dawn left, the WWE Universe hated to see the physically blessed beauty go.