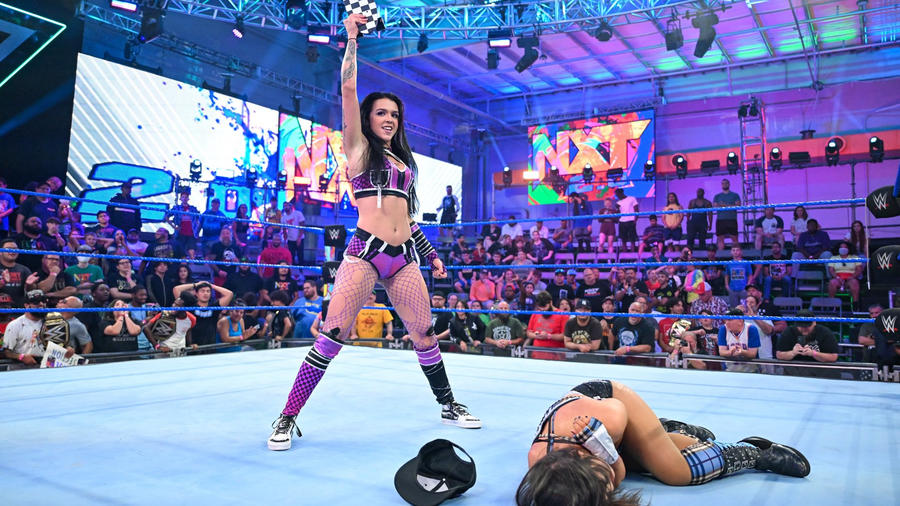 As one of the youngest competitors in NXT, it's an uphill battle for Cora Jade. Luckily, she's got a skateboard.

After appearing throughout 2021 on both NXT and 205 Live in the ring against the likes of Xia Li and Ember Moon, Jade got her big break in October when she scored a huge upset victory over The Robert Stone Brand's Franky Monet on NXT 2.0.

And she stole the show in the Women's WarGames Match in 2021, launching herself head over heels off the top of the structure to drive Jacy Jayne threw a table! After the rough landing, Jade also put her toughness on full display, continuing the match after seemingly having her shoulder popped back into place by teammate Io Shirai.

Jade's 2022 got off to an incredible start, challenging NXT Women's Champion Mandy Rose and putting in a valiant effort but ultimately coming up short to win the title. The hot start would transition into a successful pairing with real-life best Roxanne Perez, as the two would win the NXT Women's Tag Team Championship together, defeating Toxic Attraction at NXT Great American Bash.

However, Jade would soon show her true colors, becoming jealous of Perez's NXT Breakout Tournament win and turned on Perez, hitting her supposed best friend in the back with her iconic skateboard. Jade doubled down on her callousness by dumping the title she had won with Perez in the trash, emulating WWE Hall of Famer Alundra Blayze in the process.