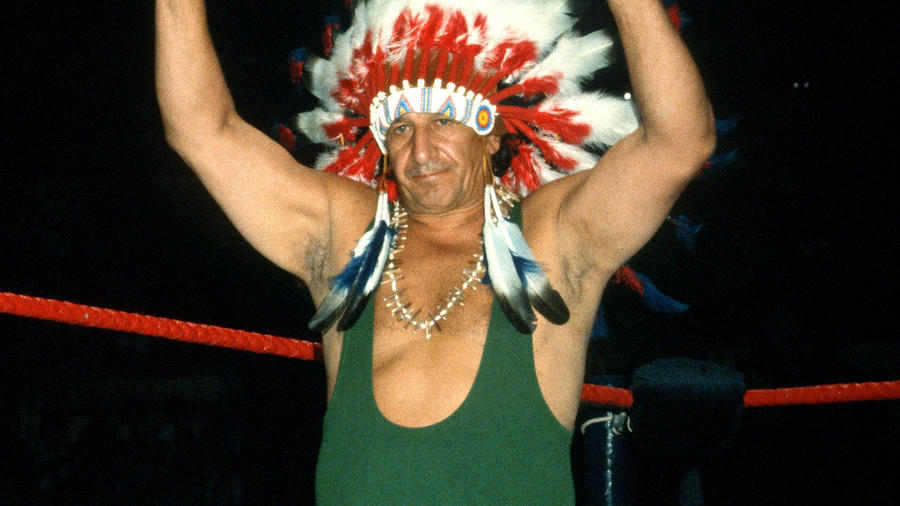 When Chief Jay Strongbow went on the warpath, no one was safe; not his opponent, not the referee, nor anyone else unfortunate enough to get in his way. Perhaps the greatest Native American to lace up a pair of boots, Chief Jay was one of sports-entertainment's most influential and popular grapplers for almost 40 years.

Strongbow's illustrious career began in 1947. Over the next two decades, he became one of the most successful Superstars in the business, racking up dozens of regional NWA championships in the southern United States. In the late-1960s, he moved on to WWE, where he would become a household name for the following two decades and beyond.

Although Strongbow was a talented singles star in his own right, he etched his name in history through his accomplishments in the tag team scene. In May 1972, Strongbow won his first of four World Tag Team Championships, teaming with Sonny King to defeat the rugged tandem of Baron Mikel Scicluna & King Curtis. Although Strongbow & King only held the title for a month, Chief Jay demonstrated that he understood the nuances of the tag team division as well as anyone. It was only a matter of time -- and finding the right partner -- for Strongbow before he would again share the title gold.

That time came in 1976 when he and fellow Native American Billy White Wolf defeated The Executioners and Tor Kamata & Nikolai Volkoff in a three-team tournament to win the championship gold. Chief Jay & White Wolf were extremely popular, but their reign was abbreviated in 1977 when they were forced to vacate the titles due to a neck injury suffered by White Wolf.

With White Wolf's career over, Strongbow decided to focus on his singles career. Years before, he had battled men like Spiros Arion and Jimmy Valiant. Back as a singles combatant, Strongbow embarked on a long-running battle with Greg "The Hammer" Valentine, and the two clashed in a memorable and brutal Indian Strap Match in 1979.

In the early 1980s, however, Strongbow was called to the tag team ranks once again. This time, it was by blood, as brother Jules Strongbow arrived in WWE, and the Native American duo set their sights on tag team titles. On June 28, 1982, the pair from Pawhuska, Okla. defeated the diabolical Japanese duo of Mr. Fuji & Mr. Saito to win the World Tag Team Championship. They would lose the championship to and regain it from Fuji & Saito later that year before finally succumbing to the Wild Samoans in 1983.

Soon after that loss, Chief Jay Strongbow retired from active competition. He remained a vital part of WWE, however, assuming a prominent role in the front office and serving as a mentor to fellow Native American grappler Tatanka in the early-1990s. At one point, Strongbow even presented Tatanka with a sacred Native American headdress as a token of his success. In 1994, Tatanka would return the favor, bestowing on Chief Jay the highest honor in WWE: Induction into the Hall of Fame.

Different Superstars are remembered for different reasons; some because of championship success or classic matches, others because of longevity or innovative in-ring style. Strongbow exhibits all four of those qualities, as well as one other memorable trait: Going on the warpath. The indelible image of his war dance and the resulting knee lifts and chops that his opponents received is among the most iconic in sports-entertainment. Chief Jay Strongbow was a great champion, a charismatic showman and a warrior, and his imprint on sports-entertainment will be felt forever.