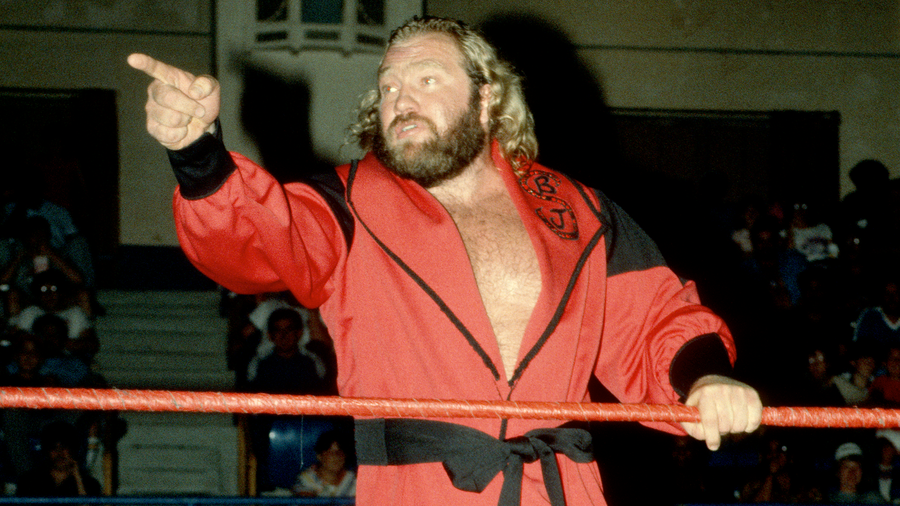 When looking back at some of the greatest Goliaths in WWE history, the name Big John Studd ranks right up there with the best. Standing 6-foot-10 and weighing in at 364 pounds, John "Big John Studd" Minton was a mountain of a man who dominated his competition, and his legendary rivalries with Andre the Giant and Hulk Hogan in the mid-1980s are considered some of the greatest of that era.

Minton was trained by legendary fellow Hall of Famer Killer Kowalski, and made his first appearance in WWE in 1976 as Kowalski's partner. As the masked Executioners, he & Kowalski made a quick impact, winning the World Tag Team Championship that year. He also competed without the mask during this time as well, using the name Chuck O'Connor.

After leaving WWE, Minton moved to the Mid-Atlantic region, where he competed as Masked Superstar #2. It was during this time that he first hooked up with future WWE teammate Ken Patera, as the duo won the Mid-Atlantic Tag Team Championship in 1978. But after losing a match to Blackjack Mulligan, he was forced to unmask and began competing under his most famous moniker, Big John Studd.

In the early 1980s, Studd spent time in Florida, the AWA and NWA before returning to WWE. Originally managed by Freddie Blassie, Studd later became a member of the Heenan Family, engaging in a long and storied rivalry with Andre the Giant over who was the "true giant" of WWE. Their rivalry produced two of the most infamous moments in WWE history.

In December 1984, Studd, along with Patera and Heenan, cut Andre's hair during a tag team match. A few months later at the inaugural WrestleMania in New York City's famed Madison Square Garden, Andre and Studd made history by competing in a $15,000 Bodyslam Challenge. In one of the first of many great WrestleMania moments, Andre slammed Studd and collected the bounty, but Heenan stole it back before he could toss the money to the crowd. Later in 1985, Studd and fellow Heenan Family member King Kong Bundy formed a regular tag team, clashing with the likes of Andre & Hulk Hogan on a regular basis.

The following year, Studd was part of another great WrestleMania moment when he competed in the WWE/NFL Battle Royal at WrestleMania 2. The Battle Royal was during the Chicago portion of the show, and Studd drew the crowd's ire when he eliminated Chicago Bears great (and future fellow Hall of Famer) William "The Refrigerator" Perry from the Battle Royal. Perry then extended his hand to Studd, but when the giant reached out to shake it, Perry pulled him over the top rope to eliminate him as well.

Studd left WWE shortly after, but returned two years later and once again rekindled his rivalry with Andre. This time, however, the Frenchman was under the tutelage of the hated Heenan, so the fans rallied to Studd's side. In perhaps the crowning achievement in his WWE career, Studd entered the 1989 Royal Rumble Match at No. 27 and last eliminated Ted DiBiase to win the match. Later that year, he would be the guest referee for Andre's bout with Jake Roberts at WrestleMania V. Before their issue could be settled, however, Studd once again left WWE in mid-1989, this time for good.

Over the next few years, Studd helped train a few grapplers for the squared circle; the most notable was Ron Reis, who competed in WCW as "Big" Ron Studd in tribute to his mentor. He also dabbled in Hollywood, appearing in episodes of "The A-Team" and "Hunter," as well as in movies such as "Harley Davidson and the Marlboro Man." Sadly, however, John Minton passed away on March 20, 1995, due to complications from liver cancer and Hodgkin's disease.

In 2004, on the night before WrestleMania XX, Studd was posthumously inducted into the WWE Hall of Fame in the same city where he made WrestleMania history two decades earlier. Another great giant, Big Show, inducted Studd into the Hall, and son John Minton Jr. accepted the Hall of Fame plaque on behalf of his dad.

In his career, Studd was a World Tag Team Champion, WrestleMania participant and Royal Rumble winner; his induction into the Hall of Fame, however, affirmed that Studd was one of sports-entertainment's true giants.