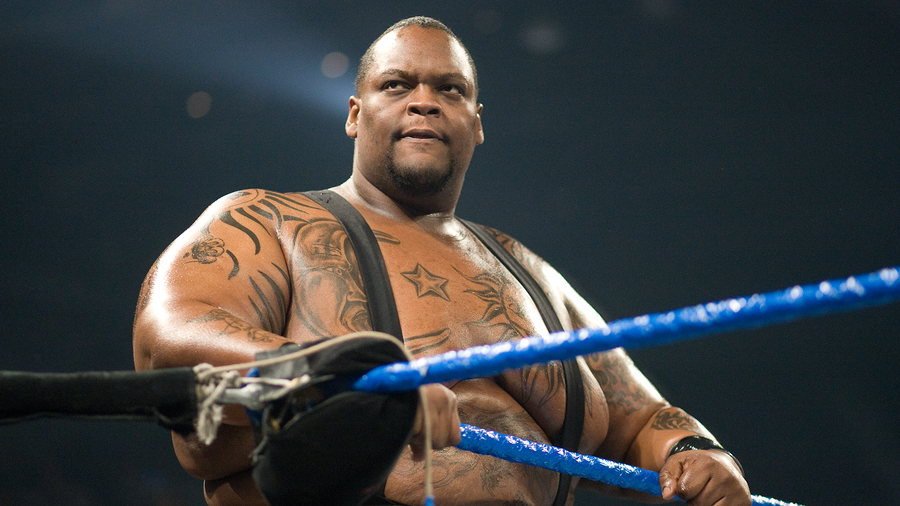 Whether he was competing as Big Daddy V, Viscera or Mabel, 487-pound monster Nelson Frazier was always one of the most intimidating Superstars in WWE.

Beginning his WWE career in 1993 under the name Mabel as a member of the tag team Men on a Mission, the big man experienced early success, winning the World Tag Team Championship in 1994. The purple and gold-clad Superstar would then go solo, becoming a dominant singles competitor and the 1995 King of the Ring. Now known as King Mabel, the behemoth battled noted competitors like Diesel and Undertaker and came close to winning the WWE Championship on multiple occasions.

After a brief hiatus from WWE, the massive Superstar returned to the ring as a member of Undertaker's fearsome Ministry. Competing as Viscera, he now had an even more terrifying appearance, complete with pure white eyes and a Mohawk. As Undertaker's most loyal soldier, Viscera carried out any of The Deadman's most twisted requests and smashed many Superstars with the help of his partner, Mideon.

In 2000, Viscera again parted ways with WWE before returning in 2004. At this point, the near-500-pounder began to show his romantic side. Decked out in silk pajamas, The World's Largest Love Machine attempted to woo some of WWE's most beautiful women, including Trish Stratus and Lilian Garcia. This love for the ladies helped Viscera link up with the like-minded Val Venis and the two men teamed together with some success.

Soon after, Viscera would have yet another change of heart when he took on the persona of Big Daddy V. Competing on the ECW brand, the gargantuan grappler became Matt Striker's personal thug-for-hire and brutalized Superstars like The Boogeyman and Tommy Dreamer at Striker's request.