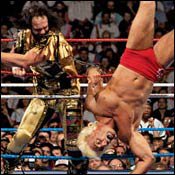 In the first of a double main event at WrestleMania VIII, Randy "Macho Man" Savage challenged "Nature Boy" Ric Flair for the WWE Championship. Defeating Flair was hard enough. Defeating a crafty veteran -- often called the "dirtiest player in the game" -- who had eyes for Savage's valet, Elizabeth, proved even harder. Savage was able to withstand the dreaded Figure Four Leglock and bloodied the champion before being able to cradle him up in a small package for the win and his second WWE Championship. Savage went on to hold the championship for five months before losing back to Flair.

In the final match of the evening, Hulk Hogan battled Sycho Sid. The match was billed as Hogan's final match, as he had recently announced his retirement from the ring. Hogan had the match won until Papa Shango interfered on behalf of Sid. It looked bleak for Hogan until Ultimate Warrior made his surprise return to even the score. Hogan and Warrior celebrated in the ring as WrestleMania VIII went off the air. Incidentally, returned to the ring shortly before WrestleMania IX.