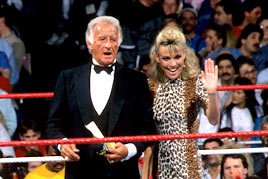 Bob Uecker
Just like he did at WrestleMania III, Bob Uecker was a roving interviewer and provided commentary throughout the evening of WrestleMania IV. Nicknamed "Mr. Baseball," Uecker was a less-than-stellar baseball player for the Brewers, Cardinals and Phillies, but is perhaps more well-known for his work in sports broadcasting. He also starred in several beer commercials as well as in the television show Mr. Belvedere.

Vanna White
White was a guest timekeeper and provided interviews from the backstage area throughout the evening. White is known for her work on the hit game show Wheel of Fortune as the letter turner.

Gladys Knight
Knight kicked off WrestleMania IV with her rendition of America the Beautiful. Knight is a legendary recording artist and a member of the Rock N' Roll Hall of Fame as a member of Gladys Knight and the Pips. Her band appeared on the last ever episode of the Ed Sullivan Show and she was ranked No. 18 on the list of VH1's 100 Greatest Women of Rock N' Roll. 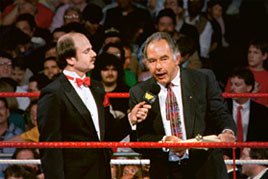 Robin Leach
Leech presented the WWE Championship at the beginning of the tournament. Leach is known as the host of the then popular television show Lifestyles of the Rich and Famous.

Sugar Ray Leonard
Leonard, who sat ringside with his family, is known as one of the best pound-for-pound fighters of all time. He won 145 of 150 amateur fights and won gold medals at the 1975 Pan-American Games and the 1976 Olympics before winning several titles professionally.