The Texas Rattlesnake cracks a cold one and weighs in on his all-time toughest challengers, explains why he and Mr. McMahon never fought on the Grandest Stage of Them All, and definitively answers whether he’ll ever face Hulk Hogan in the ring.

WrestleMania III is where Hogan slammed Andre, which set the bar for all rivalries that followed. In your opinion, what’s the significance of that moment?
What made that moment great was the fact that Andre was a giant. He didn’t just walk into the WWE locker room, punch a time-clock and say: “OK, I’m a giant now.” No, he lived like a giant 24/7, and nobody could slam him. So here comes Hulk Hogan, one of the biggest stars in WWE history, and he finally does the impossible. He picked up Andre and slammed him. The roof came off the place, and people talk about it to this day. You got what you didn’t expect. Andre and Hogan were two guys who came along at the right time and at the right place. I really believe that if Andre were here now, he’d be enjoying great success. The guy scared me. When he got mad, he’d be the last guy you’d want to be around.

In your opinion, what is it that makes a WrestleMania rivalry truly legendary?
To me, what matters most is the strength of the two guys in the feud and how much one guy is loved and how much the other guy is hated. The more important you are, and the more people love or hate you, the bigger the feud. I also think the style of wrestling comes into play. Whether a guy’s a great technician or a brawler, those are elements that bring something interesting to the match. 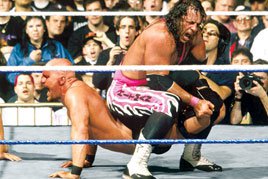 While we’re on the subject of great ’Mania rivalries, your Submission Match against Bret Hart at WrestleMania 13, in which you passed out in the Sharpshooter, was a defining moment in your career. Where do you rank that match?
I first found out about that match when I was at home in San Antonio with an injured knee. I was watching Raw, and a commercial came on for WrestleMania 13. I heard Vince saying that the main event would be Undertaker vs. Sycho Sid, and the second main event would be "Stone Cold" Steve Austin vs. Bret Hart, and then the kicker came…in a Submission Match! I literally flew off my couch thinking, “I’m not a submission wrestler!” But it all came together that night; at the end of the match, the fans started chanting, “Austin, Austin.” I tell people that that was probably the most important match of my career. All matches are important, but that one was pivotal for me, and it set the standard for many things to come.

For all the feuding, you and Mr. McMahon never met at WrestleMania. Do you regret never getting the chance to battle The Chairman on the biggest stage of them all?
I can’t say that I regret it. But it would have been nice to face off against Vince at WrestleMania, just because that’s our Super Bowl, and that was our bread and butter—Austin vs. McMahon. I think you could have easily put us in a match at WrestleMania, but for some reason we always did other things. I don’t regret it, though. We did so much, and we did it so well. Vince is one of the few people that I felt truly matched my beliefs and my intensity. We understand each other on many levels. There are very few people who I’ve thought really had the same intensity, conviction, delivery or gut instincts that I do. I’m not speaking disparagingly about anybody; that’s just the way I feel when it comes to what "Stone Cold" Steve Austin brought to the ring every night.

The Rock debuted only a few months after your breakout moment at 1996’s King Of The Ring. Did you have any inkling then that he would become one of your greatest rivals?
No, I didn’t. When The Rock first came out, he was a guy who had great size and a great look. You could see that he had presence, but his ring style at that time, if I daresay, was kind of flimsy and hokey. I say that with all due respect, because The Rock knows I love his style. But he had a lot of raw tools, and in the course of a very short time, he turned his total performance into a winning combination.

What did you two have that made your ’Mania matches so special?
Our rivalry was all about high expectations—his expectations for himself, and my expectations for me. He expected he would steal the show, I expected I would steal the show, and we brought out the best in each other. We were alike in a few respects, but total opposites in others, and that’s what made the chemistry work. There was always electricity in the air whenever "Stone Cold" and The Rock faced off, especially at WrestleMania. We both knew we were going to put everything on the line and make sure the crowd went home saying, “Holy crap! The Rock and 'Stone Cold' kicked ass.”

Which ’Mania match waged between you and The Rock stands out as a favorite?
That’s an easy one: WrestleMania X-Seven in Houston. I grew up 100 miles from Houston, down Highway 59 South; it was right in my backyard. And my alliance with 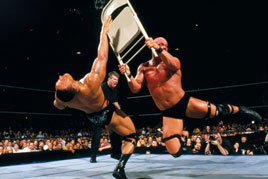 Vince at the end was a real shocker. Looking back, it wasn’t the best thing we ever did. But the whole match up until that point was easily one of the greatest contests I’ve ever been a part of, and the best WrestleMania battle The Rock and I ever fought, bar none. Now, if I could go back, as soon as that match ended, when Vince walked up to me, I would have shook his hand and said, “Watch the Stunner,” and dropped him right there in the middle of the ring. That’s hindsight being 20/20!

Do you miss the explosive chemistry that comes with being embroiled in a classic WWE rivalry?
When I got out of WWE, I missed it terribly for a few years. But it’s behind me now. So everything that I remember, the excitement, the adrenaline, feeding off the crowd, I can recreate it all in my mind. I have so many great memories and they’re right there for me. These days, I don’t crave it, and I don’t miss it anymore. I had my time. I’m happy with what I did, and I’m OK with not being in the ring anymore. It takes a while to get to the level where you don’t miss it anymore. But do I still love the business? Absolutely.

Do you think if "Stone Cold" faced Undertaker at ’Mania, we’d still be talking about The Deadman’s streak today?
No way! That’s a great question, because if you asked him the same thing, he’d say, “Absolutely.” So I’ve got to stand up for myself, and he’s got to stand up for himself.

The Rock won the last bout you two contested, leaving the final count between you two at 2-1. Are you aching for another shot at him?
No—that was my last match, and I’m not looking for a rematch. Could it be done? Of course. But there’s no use talking about it. I’m very happy and satisfied with the memories I created in the ring, and I don’t want to try to recreate them. And I definitely do not have any interest in delivering anything that would be second-best to what I’ve done before.

Speaking of dream matches...let’s settle this once and for all. What are the chances of us ever seeing Austin vs. Hogan?
After I retired, for two or three years, they asked me, “Do you want to wrestle Hogan this year? Do you want to wrestle Hogan?” And the answer is: No, I don’t. I give him credit for having such a wonderful career. He did, and so did I. When I got hot in WWE, it was like nothing anybody had ever seen. But then there was nowhere else for me to go, so I decided to move down the road. I don’t care to wrestle Hulk Hogan. I don’t think it would live up to fans’ expectations.

WWE NXT Nov. 30, 2021 results: The preliminary battles are over and NXT is set for war