ATLANTA – Bringing smiles to kids’ faces is what the WWE Superstars and Divas do best. No better example can be made than when they visited the patients and families at Children’s Healthcare of Atlanta at Scottish Rite during WrestleMania Week. (PHOTOS)

“We walked around the hospital and there were faces lighting up all over the place,” Sheamus told WWE.com.

“Sometimes you lose track of what’s important. Sometimes people take stuff for granted and you take your own health for granted. You see kids like this who are less fortunate than us and they still have that smile and are doing their best to beat it, it’s makes you realize what’s important in life,” the United States Champion said.

Kelly Kelly, who was greeted by cheers and hugs from many of the children, called her experience at Children’s Healthcare of Atlanta “overwhelming.” 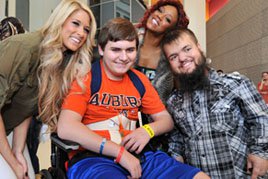 Grainne Owen, the executive director of Curing Kids’ Cancer, a national, non-profit organization that works with Children’s Healthcare of Atlanta, joined the Superstars and Divas on their visit to the medical center where her own child was treated. She was incredibly thankful for their support and presence.

“To me, personally, having had a child who did not survive cancer and now trying to help the other kids, it’s just wonderful. It’s a true blessing really to see them all here. They’re so willing to get involved with the kids and spend time with them. It really makes me want to cry!” she said.

Since finding Curing Kids’ Cancer six years ago after she lost her son, Killian, at the age of 9 to leukemia, the organization has raised more than $1.5 million for children’s cancer research. She explained that WWE’s support is so beneficial to families fighting the disease.

“It means so much to them because you can feel so forgotten. When you’re in the hospital, your world revolves around needles and medicine and procedures,” Owen explained. “This is just a little bit of something really special that they get to participate in. Having it come back to them and seeing how much these big guys care about them just means the world.”

Kelly Kelly explained that WrestleMania Week isn’t just about WrestleMania XXVII, but about spending time to share their lives with the WWE Universe.

“I think it’s so special that we get to do stuff like this, especially this week. To reach out to the kids who can’t leave the hospital and go to Axxess and the signings to meet all of us, we wanted to come to them and talk to them and give them a little bit of our happiness,” she said. “We try to cheer them up and keep them smiling. They were so happy. It just warmed my heart.”

Sheamus said giving back to the WWE Universe is an integral part of being a WWE Superstar.

“If we could give back something small, and make an impact on these kids’ lives just for a day or a week or a month, whatever it is, why not?” he said. “It’s the small things that are important in life and sometimes we lose track of that.”

Raw results, August 2, 2021: Nikki A.S.H. proves herself in No Holds Barred win against The Queen